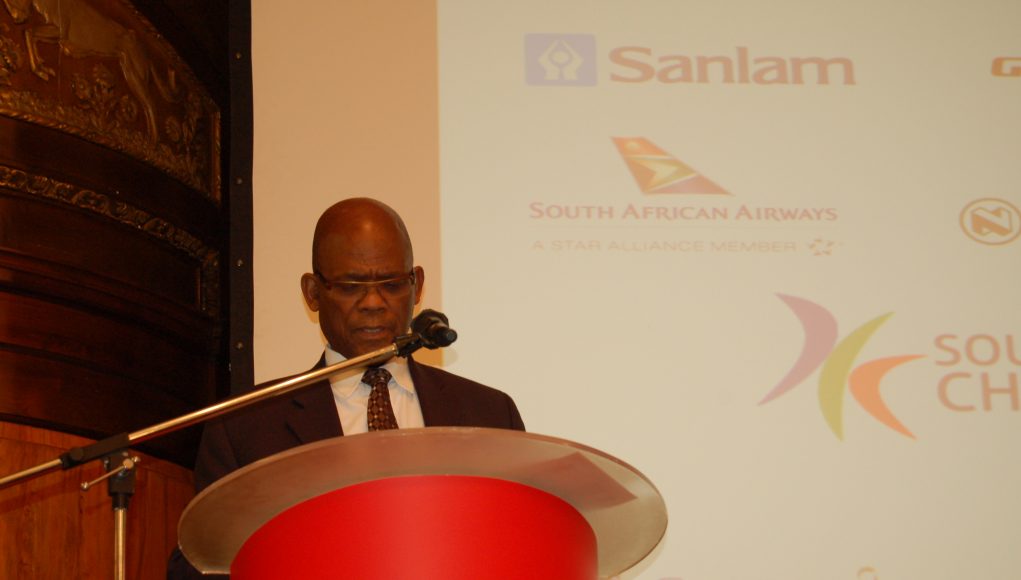 On Wednesday night the annual South African Business Awards, hosted by the South African Chamber of Commerce at SA House in London, honoured the most outstanding South Africans in the business arena across six categories.

There was an excited buzz in the air before the ceremony began, as the 150 guests and nominees chatted and networked over champagne before moving into the auditorium to find out who the winners were.

She said that there more than 2,000 total votes for nominees on TheSouthAfrican.com. These made up 30% of the overall vote, while a panel of eight independent judges (made up of sponsors and Chamber of Commerce board members) contributed the remaining 70% of the vote for the winners.

Innovator of the Year was won by Francis West, who received his award from Kevin Ryder of sponsor Nedbank. Second place in this category went to Jana Meyer. West said he hoped his award would bring him good exposure “to help South African companies use an innovative UK IT partner to set up their IT systems in the UK.”

The winner of Business Leader of the Year was Claudio Chiste, who received his prize from Gary Kershaw of category sponsor SAA. The runner up was Reg Bamford.

Chiste, who spent just over eight years in the South African military as a naval officer, said, “As with many others looking to move into the private sector after such a long period in the military, I was concerned about having transferrable skills. However, in my own experience, it seems long-term career success is heavily influenced by an individual’s self-belief and determination.” He said in terms of his career at Investec, he found the company’s culture of empowering individuals and celebrating the entrepreneurial spirit, especially in the maritime trade and ship finance arena, had been a great fit with his career goals and values.

“I remember a couple of years ago when these awards did not exist. I think the Chamber of Commerce ha ve done an outstanding job in recognising the achievements of South Africans abroad. From nothing they have created a premier event, now widely regarded as a ‘must attend’ event.”

Entrepreneur of the Year went to Mark Griffiths, who accepted his award from Lucy Mullins of The Red Phone, while the runner-up was Paul Harrison.

Griffiiths said, “This award means a great deal to me and the SecondNature team because we are a business striving to engineer the transformation of the private and public sectors by demonstrating the benefits of linking financial, social and environmental metrics. Companies that address sustainability as an opportunity will be rewarded, while governments who seize this mantle will deliver improved quality of life for their citizens.

He felt the awards event was well put together in both the set up and the execution. “For example the process of nomination and voting was efficient and well managed. Good food, sumptuous wine and great company on the night. Bravo!”

Jessica Shelver was named as Rising Star of the Year, while the runner-up was Pily Mirazi. As Shelver was unable to be at the ceremony, Noma Mthimkulu collected the award on her behalf from Lukas Van Der Walt of Sanlam. Shelver was thrilled to hear she had won. “My goal is to be able to help South Africans and I believe that bringing widespread attention to the issues in the country is the first step to achieving that. Winning this award, as humbling as it is, enables me to do that. It will in turn bring new attention to the issues that matter. For that, I am eternally grateful and look forward to making a positive difference.”

Riandra White of Standard Bank handed over the award for Woman in Business of the Year to Lisa MacLeod. Neleen Strauss came second in this category. MacLeod was honoured to receive the award, “Particularly at a time when there is so much focus on senior women in business, and drawing more senior female talent into the boardroom. I am returning to the FT from maternity leave in the early new year in a new role: as Head of Operations for FT.com, so will be facing a new challenge as the newspaper industry moves to an increasingly digital reality. I am very excited and looking forward to it – and the award has really been the cherry on top of a wonderful year.”

“It was an excellent event with a great collection of South Africans – which is always a lot of fun, and it’s so impressive to see how well they all do on the international stage. We should always be proudly South African.”

Janet Broadhurst accepted the award for Charity of the Year on behalf of FoodBank Foundation. Christopher Whiting-Ayling of category sponsor Global Options presented her with the award.

All six winners received a year’s free membership of the SA Chamber of Commerce as part of their prize.

After the ceremony, the guests continued mingling over some delicious canapés and South African wine and also had the chance to taste the decadent South African caramel and chocolate flavoured vodka liqueur, Lovoka.