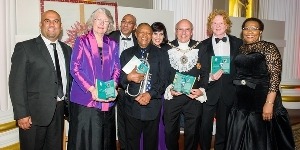 A diverse group of British investors and bankers heard this week from some of South Africa’s most dynamic business leaders and were given insights into the dynamism and forward trends in the South African economy as public and private sector alike strive for higher growth levels.

A delegation of business leaders and representatives of the Tshwane Metropolitan Council were invited to the UK by South Africa’s Ifa Lethu Foundation, and were frontline speakers at a gala event at London’s iconic Mansion House, residence of the Lord Mayor of London, Alderman Fiona Woolf on Thursday (4th September).

The South African delegation was headed by Dr Anna Mokgokong, chair of the Ifa Lethu Foundation and of Community Investment Holdings, a multi-sector black empowerment consortium whose investments include the mining, health, agricultural, agro-processing and education sectors.

Dr Narissa Ramdhani, CEO of the Ifa Lethu Foundation, said it was the mission of the Foundation not only to realise its own objectives of youth development and poverty alleviation and repatriating art which left the country during the apartheid era, but also to assist in the broader role of attracting investment to the country.

More than 170 people including the likes of Lord Renwick of Clifton, Baroness Chalker of Wallesley – both patrons of the Ifa Lethu Foundation – iconic South African trumpeter and singer Hugh Masekela, Simply Red singer Mick Hucknall and a host of British bankers and investors listened to speeches by Khanyisile Kweyama, executive director of Anglo American in South Africa and Baroness Scotland, British Prime Minister David Cameron’s personal envoy for promoting business between the UK and South Africa.

The crowd at Mansion House were spell-bound by a rare performance by Hugh Masekela and Larry Willis , the American jazz pianist who Masekela first met and collaborated with in New York more than 50 years ago.

The presentation was made by Rezwan Mahmood, representative in the UK of the Scoin Shop of South Africa and owner Alan Demby.

Speakers stressed the huge potential of growing South Africa as a destination for British trade, investment and sport and arts and culture exchange.

At a business breakfast at Nomura International, the Japanese bank, on the same day, Kweyama spelled out the clear advantages of investing in South Africa in a regulatory environment in which contracts are backed up by a strong judicial system, world-class banks and financial services and astock exchange which provides access to capital and a secure haven for foreign investors in Africa.

Kuseni Dlamini, chair of the Times Media Group and director of Massmart/Wallmart in South Africa said that South Africa offered dynamic opportunities to foreign investors as the entry of Wallmart had shown and the country still offered the best opportunity to investors in Africa to secure and monitor their investments in Africa.

Nomura host, Peter Attard Montalto, who heads up the bank’s emerging markets, said that South Africa faced a number of challenges in the years ahead but still remained an attractive destination for investment. He singled out unemployment, education and the energy situation as the most immediate challeges that needed to be addressed.

Kweyama spelled out the vision of the National Development Plan, a government plan to co-ordinate development in the country, create jobs and roll back the frontiers of poverty and unemployment and reverse the legacy of apartheid.

She said that although Anglo American had diverse international interests it was still fully committed and invested in South African growth and development.

Dr Mokgokong said that South Africa was wide open for business and investors faced a wide choice of sectors to become partners in South African development.

“Come and see for yourselves and experience the buzz in South Africa,” she said.

Both speakers stressed that business, growth and development were inextricably linked and one could not talk about getting involved in business in South Africa without becoming a partner in the development of the country.

The business round-table included a group of high-networth Chinese investors, institutional investors, private equity managers and representatives of the South African Chamber of Commerce in the UK.

Carol Freeman, representing the SA Chamber, said that it was encouraging to have such a dynamic group of women CEO’s presenting the investor opportunities in the country and present the faced of business and the private sector to investors in the UK.

The Lord Mayor will travel to South Africa next week with a high-powered group of investors from the City of London on a five-day mission to attract investment in the city and promote joint ventures with South African partners.

Baroness Scotland and Sir Michael paid warm tribute to the work of the Ifa Lethu Foundation which, they said, was doing exceptional work in the development of youth and poverty alleviation.