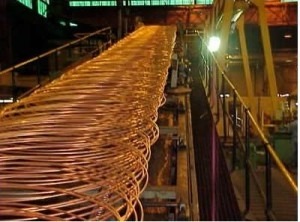 In a boost for South Africa’s steel industry, the South Africa’s state corporation – Industrial Development Corporation (IDC) is leading a consortium of South African and Chinese companies in a R5.3bn (approximately $610m) bid for a 74.5 per cent stake in Palabora Mining.

Palabora Mining is SA’s biggest copper miner and generates most of its earnings from exporting magnetite – a key ingredient for Chinese steel mills and producing vermiculite, which is used by the aluminium smelting industry.

The board of Palabora said: “The mining giants have reached a binding agreement with the IDC consortium to sell their combined interests at R110 ($12) a share, valuing the company at R5.3bn.”

Companies participating in the consortium are: Hebei Iron & Steel Group, China’s largest steel producer acquiring 35 per cent; Tewoo Group acquiring 20 per cent; General Nice Development acquiring 25 per cent and the IDC, which will hold 20 per cent.

IDC spokesman Mandla Mpangse said: “The acquisition of Palabora is important as it secures and facilitates backward integration of sizable magnetite ore material for a number of IDC steel initiatives, including the Masorini Iron and Steel project and the IMBS scrap substitute project under construction in Phalaborwa.”