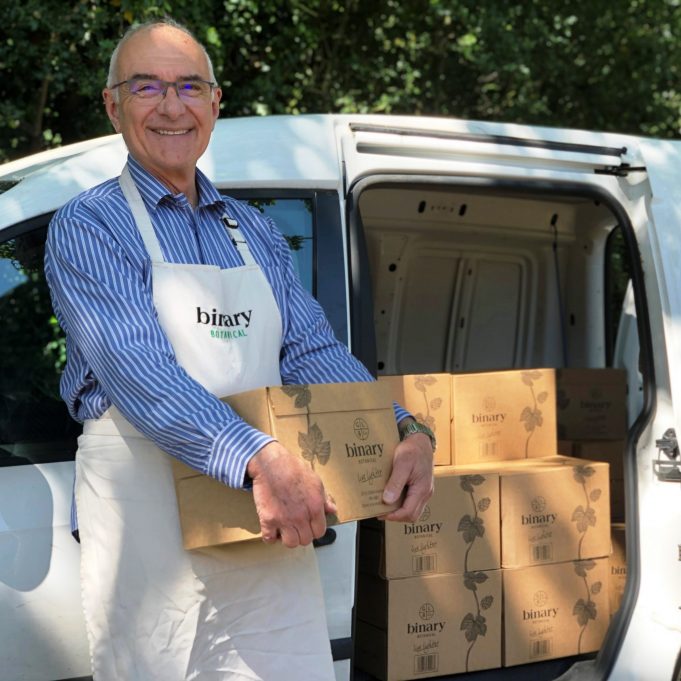 A dynamic south-east England brewery has responded to turbulent times with fresh approaches to supply, sales and marketing of their award-winning Binary Botanical beer.

Like many small beer producers, The Good Living Brew Company saw the UK Covid-19 lockdown measures shut down the places that had been selling their artisan ale. Such small breweries were left facing an uncertain future – often with worrying amounts of unpaid invoices. According to James Calder, the UK’s Society of Independent Brewer’s Chief Executive, smaller-scale beer producers saw their sales ‘fall off a cliff’ almost overnight:

“Unlike the global beer brands who can supply supermarkets in great volume, small independent breweries sell the majority of their beer through pubs, bars and restaurants.”

The organisation reports that beer sales for small breweries in Britain are down on average by 82% since the outbreak of the pandemic.

According to Danielle Bekker, the company’s Supply Director who began her career with South African Breweries, orders from the hospitality sector were immediately cancelled:

“You have a whole supply chain based on a certain level of consumption that is now lost.”

The Surrey-based Good Living Brew Company, however, have nurtured a spirit of enterprise and agility since they began trading in 2018. They pioneered a 5-day hop leaf extraction process used in Binary Botanical beer. This delivers a unique, tangy flavour instead of the usual ‘bitter’ beer taste to produce a completely new style of brew. The have also been ahead of the curve in terms of sustainability by brewing using hop leaves that are usually discarded. Their approach of brewing beverages that are lower in alcohol and calories, relative to wine (without compromising on taste), anticipated changing preferences in alcohol consumption in the UK and elsewhere.

Their first response was to re-think their sales strategy:

“Off trade places (like supermarkets and convenience stores) are, understandably, not making small brands a priority. Like many small breweries, our primary focus is now to reach consumers directly.”

“Our main rented warehouse furloughed the majority of their employees and closed. In response we set up a satellite warehouse to give us easy access to stocks. Instead of selling in pallets we sell in case quantities. The units we use are now different and so our warehouse requirements have changed.”

Fortunately, the company does not have a keg issue as the product is bottled.

“We spent several weeks looking to streamline supply lines costs, transport and storage: everything to reduce our fixed cost base. Most suppliers have been really good.”

So what was the biggest risk for the company?

“Our biggest risk by far was distribution because we did not have any ingredients and sourcing issues,” explains Danielle, “Reaching customers direct by courier was the key challenge.”

There is always the risk of the present delivery company ‘falling over’ at some point. Good Living Brew quickly employed a local driver to make local deliveries each day. Danielle observes that many small businesses can run into problems when scaling up delivery services. Failure to optimise the efficiency of delivery routes and similar measures can impact profit margins.

Swiftly pivoting the business to focus on B2C sales has paid off for the dynamic producer:

“Our revenue has pretty much held which is brilliant,” says Danielle, “People still want the product but have to come to us direct. Two to three weeks into the crisis we were seeing our demand rise, people are becoming more comfortable with online shopping, especially our more senior consumers.”

Selling direct to the public avoids the problems of invoicing so it also offers cash flow advantages.

” Online sales direct to customers has risen from 10 percent before the UK lockdown to 90 percent in the weeks afterwards.

For Danielle, it is now essential for the company to excel in e-commerce:

“Our biggest spend change has been on digital marketing. It has become a priority.”

In terms of corporate citizenship, the team remain steadfast in supporting local initiatives.

“The best small businesses work to make an impact in their community,” says Danielle, “We don’t want to just be ‘seen’ to be doing something.”

She also points out that many charities are struggling at this time but are failing to get funding or airtime. Good Living Brew have joined other traders in Horsell to support good causes, including neighbouring Thurstons Brewery who offered bottles of fresh beer in return for donations to the local Woking & Sam Beare Hospice.

With many countries seeing reduced economic output and consumer confidence expected to fall considerably, Danielle is realistic but also open-minded about the future for the food and drink industry:

“I think it is fascinating. Will people return to their normal consumption and purchasing patterns? Will consumers become more passionate about local products? I cannot believe our business will be the same. Peoples’ buying and socialising behaviour may change.”

For the UK she is especially nervous about the demise of the High Street being accelerated as pubs and eateries closing down if they cannot pay rents. For Danielle, however, SME food and drink producers may have brighter prospects:

“There have been disadvantages to being small in this crisis but you can be more agile. And your business models can switch more quickly to seize new opportunities in the future.”