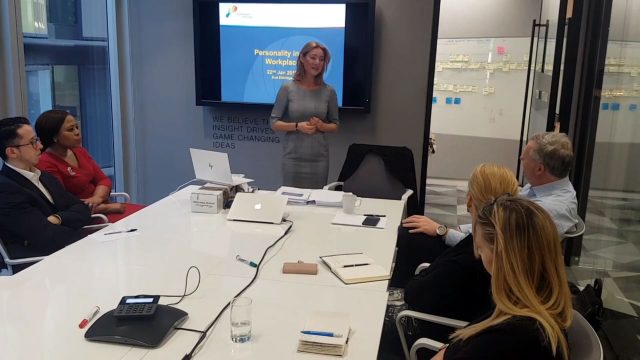 Leadership means different things to different people. Being a leader is a unique experience for those in roles either as managers, business owners or specialists in their field of expertise.  But what we do know for certain, is that the more we learn about ourselves, the better leaders we can be.

On the 22nd January, a remarkable group of leaders, representing a range of industries from banking to tourism, finance to administration and retail, gathered in the Innovation Lab at the Commonwealth Bank Of Australia, on Ludgate Hill in the City of London.  The location is apt. The name of Ludgate Hill itself, comes from Old English – the opening of a gate.  One of the most important traits of a leader is to open gates for others to reach their true potential.

For centuries Ludgate Hill has been instrumental in leadership in the City.  St Pauls’ dramatically positioned at the top of the hill as the religious leader of not only the City, but also the country.  During the Blitz, St Paul’s role as a symbol of strength and survival, helped inspire those across the United Kingdom to show leadership.  Queen Anne looks down on Ludgate Hill. Under her leadership the Acts of Union brought together the kingdoms of England and Scotland, uniting them as a single sovereign state. Some of London’s most famous Coffee Houses on Ludgate Hill, were frequented by leaders such as Benjamin Franklin, political theorist Jason Priestly and the great William Shakespeare.

What makes a good leader?

According to Eva Eldridge, a psychologist with 20 years’ experience in neuroscience and clinical psychology, a great business leader knows themselves. Eva believes that understanding human emotions, and individual differences and drivers, leads to a deeper self-awareness.  This comes together to help leaders be empathetic and authentic.

In the first workshop led by Eva, we looked at:

We are all working and leading in rapidly changing environments. The more we can know and understand ourselves, the more equipped we will be to manage this change.

The next workshop is on Wednesday 27th February.

In this session Eva will work through: