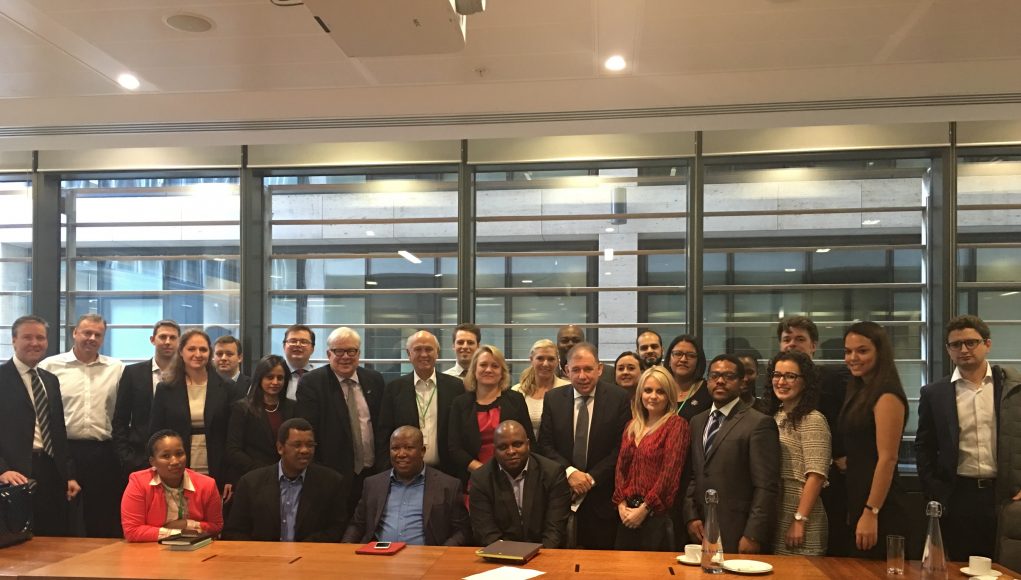 The South African Chamber of Commerce UK, based in London, acts as a facilitator for investment both within the UK and into South Africa. We are an apolitical organisation that further provides a platform for engagement with political leaders for our business members. It is important to engage at this level to provide businesses an opportunity to voice concerns over matters such as bilateral trade and how this is affected by political policies and agendas. To this end and for the very first time, we engaged with the Economic Freedom Party (“EEF”) and its leader, Commander in Chief, Julius Malema.

The EFF is a South African left wing party that has ever increasing support amongst the working class in South Africa, currently holding 25 seats in Parliament – no small feat given the party was only formed in 2013. At a meeting on Thursday, 26 November 2015, with leading members of the South African Chamber of Commerce UK he said: “If investors in South Africa want their investments to be stable and productive they need to issue shares to the workers rather than enter into corrupt relationships with politically-connected individuals. Mr Malema was here to address several groups of investors in London this week.

He said that black economic empowerment had been a disaster in South Africa and was at the heart of the country’s economic woes and the collapse of State-owned corporations such as SAA and the SABC.

“So-called Broad-Based Black Economic Empowerment is a corrupt relationship between the business community and politically-connected people in the ruling African National Congress (ANC) who then offer protection to those who have empowered them,” Malema said.

Malema said the vast majority of South Africans had been excluded from the benefits which a strong private sector brought and it was time for a gear-change in the business community.

He said business leaders were beginning to realise that only real protection they could have was through the relationship with their workforce.

“We have a government which has institutionalised corruption and is behaving like a headless chicken,” he said referring to the capitulation on university fees without addressing core issue of how to make education available to all.

Malema addressed a small group of top British and US investors in South Africa at a lunch hosted by Rob Hersov, founder and chairman of Invest Africa, on Tuesday and on Wednesday Malema travelled to Oxford to deliver an address at the Student Union at Oxford University where the son of Dali Mpofu, chair of the EFF, is a student.

British investors and the heads of major companies with their headquarters in London have been listening intently to Malema’s message and have expressed surprise at his relatively pragmatic approach towards business despite his commitment to Marxist-Leninist ideology and intention to nationalise banks and land if the EFF won power in an election.

Malema said that EFF was interested only in peaceful change through the ballot box and would under no circumstances enter into coalitions with the ruling ANC at any level of government.

“If we enter into coalitions it will be with opposition parties,” he said, adding that a central goal of the EFF was to break the “arrogance of the ANC”.

Speaking yesterday at a meeting of the South African Chamber of Commerce in the UK, hosted by the global accounting firm Deloitte, Malema said that workers would not be going on strike and if they had a share in the business and received dividends. Instead they would then have a vested interest in the success of the business.

The meeting was convened by Melissa Powys-Rodrigues, Director and Chair of the SA Chamber in the UK. Debbie Thomas, Partner at Deloitte LLP and Head of Africa Services, who chaired the question-and-answer session.

Malema said that some companies, such as Lonmin, had not only neglected their work force but had also shifted their profits to off-shore tax havens such as Bermuda.

During question time, Malema had a protracted dialogue with Stephen Koseff, the Global CEO of Investec, who said that while he agreed with much of what Malema had said about worker shareholder schemes he appealed to him not to be so “radical” and to scare people but rather to adopt a softer approach.

Koseff said a partnership between capital and business was possible but needed to be discussed in a calmer atmosphere.

They had a robust exchange over the issue of state ownership versus the private sector and both pointed out failures with both state and private ownership respectively.

Calling on investors to enter into partnerships with their workforce Malema said:

“Come and invest and come and help the people to be part of the wealth creation process,” he said.

He said if business put buying power in the hands of the workers, the country would grow and business would prosper. Managements and the bosses would then be “one happy family” working towards the same goal and with a shared stake in the success of the business.

Malema said that the EFF was neither anti-white or anti-business.

“We are not anti-white,” Malema said. “We are pro-black. At present those who benefit from the economy are white and the victims are black Africans,” he said, adding that the EFF did not want to replace white supremacy with black supremacy.

“We won’t allow white supremacy to be defended. We need people and not colour,” he said.

He said the EFF wanted young South Africans abroad to bring their skills and experience home and help build a new country.

(John Battersby is a Director of the South African Chamber of Commerce UK, author, journalist and an independent consultant.)