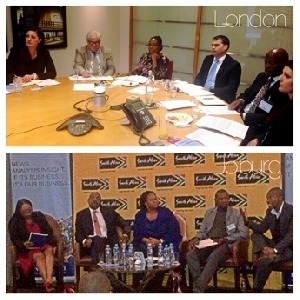 The SACC participated via video-link in a groundbreaking workshop with Brand South Africa’s SA Competitiveness Forum on 26 June as part of a panel of Global South Africans in London who joined the dialogue on the National Development Plan and Competitiveness: A Call for Active Citizenship.

A panel in Johannesburg, including Brand South Africa CEO Miller Matola and Tryphosa Ramano, CFO of Pretoria Portland Cement, debated the steps that needed within the framework of the National Development Plan to boost economic growth and investment through active citizenship, skills training and leadership in order to create more jobs and alleviate poverty.

Contributors in London included Peter Maila, investment director of the CDC group’s equity investments; Lyndsey Duff, head of secretariat at the SA Chamber of Commerce UK; Claudio Chiste of Investec capital markets; Vessi Hinovska of JP Morgan; Thobile Mazibuko, economic counsellor at the SA High Commission; and Peter Montalto, director of emerging markets for Nomura Bank, on a telephone link from Frankfurt where he is heading a Nomura roadshow for investors in South Africa.

Duff said that the Global South Africans and the wider South African community in the UK are eager to engage and assist in the quest to make South Africa more competitive in the global economy. She said it was vital to create sustainable jobs which would add value to the economy rather than be a drain on it.

A lively debate followed in which young entrepreneurs in Johannesburg played a central role and stressed the importance of including youth in the rolling out of the national development plan.

The keynote speaker, Sello Mosai of Productivity South Africa, stressed the importance of every citizen playing their part in a common program to achieve equity and prosperity.

He said South Africa was competitive in some areas and not in others and needed to prioritise those areas where it was falling short.

Mosai said they key challenge facing the country was to up the game on business efficiency.

“We need to work smarter and improve quality and increase the appetite for entrepreneurship,” he said.

BrandSA researcher, Dr Petrus de Kock, said that BrandSA has a key role to play in demystifying the NDP and ensuring active citizenship participation in its implementation.

Matola said that government needed to engage with business and the private sector needed to be accountable.

“Then we can take this country forward,” he said.

Matola conceded that there was a need to improve communication of the NDP but that the plan touched all the bases for an economic revival in the country.

Ramano said South Africans needed to learn to love themselves and to unite so that the country could move forward together.

The GSA panel London was constructively critical and raised many of the same issues as those raised by the attendees in Johannesburg.

The overall theme – at both the Johannesburg and London end – was the need to increase business efficiency through training, mentorship and building management capacity.

Maila, who this week attended the Standard Bank investment conference in London, said that concerns being raised by investors included labour issues sparked by protracted strikes and the threat of more to come, the sharp fall in the quarterly GDP in the last quarter to 0.6% and the downgrading to BBB by two of the major rating agencies, Fitch and Standard and Poor.

But countering the rating downgrade this week was the good news that the value of the South African Brand rose from $222 billion in 2012 to $270 billion in 2013 making it the most valuable African Brand and one that outranks several European and Asian nations.

Other points raised were the urgency of increasing the efficiency of those responsible for delivering the goals and objectives of the national development plan. There was also a need to popularise the NDP so that its central goals – to create jobs, eliminate poverty and attract investment – could be simply understood by ordinary people.

Maila stressed the need to choose clear priority projects and implement them successfully in order to build a momentum rather than trying to be all things to all people.

There was a general consensus that active citizenry – one of the six key pillars of the NDP – was something that every individual could contribute to ensure the strengthening of development, democracy and accountability.

There was not a shortage of entrepreneurs or capital to support them. There was a lack of support and training for entrepreneurs in finance and management which would ensure profits were ploughed back to build the business rather than cashing in one’s chips.

It was no use to relying on government tenders to build a business. There had to be a more sustainable basis for building a business in the longer-term. And there was a lack of managerial capacity which needed to be addressed.

Due to the reliance on tenders the mismanagement of funds was widespread and this was undermining the overall effort to build a sustainable economy.

Maila said government worked relatively well at the centre, got more shaky in the provinces and more often than not collapsed at the municipal level. Most of the skills were concentrated in Gauteng and the Western Cape. Was there not a case for centralisation of projects in other regions?

Matola said in response to Maila on the challenge of upgrading skills and capacity of local government that this was a central objective of the NDP and a clear strategy was central to the plan and government was meeting the challenge. He said that the appointment of the former Finance Minister Pravin Gordhan to the portfolio dealing with local government was another indication of government’s seriousness in this regards.

This article was originally published by Brand South Africa on 27 June 2014.