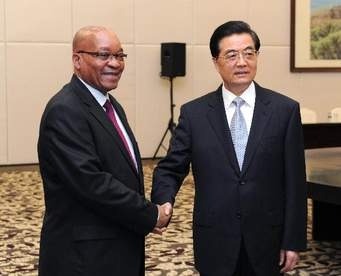 China has always had a massive influence on South Africa’s former leaders. Now these two emerging economies are both members of the BRICS group and have signed cooperative trade, military and even media deals.

Former Chinese leaders such as Mao Zedong, Zhou Enlai and Zhu De, as well as the Chinese people, gave great support to the South Africans’ fights for independence and against apartheid rule.

That victory of the revolution in China, marked by the founding of the People’s Republic of China (PRC) in October 1949, was an important influence on the South African Struggle.

Mandela pushed the establishment of diplomatic relations with China in 1998, about a year before he retired as the first black president in South Africa’s history. Bilateral ties between the two countries have witnessed smooth development since then. The friendship forged by the old-generation leaders has been further enhanced by the Chinese and South African governments.

During the fight against apartheid rule China played a minimal to non-existent role, according to Professor Ian Taylor, professor of international relations at the University of St Andrews and the University of Stellenbosch. There wasn’t formal Chinese involvement in the liberation struggle in South Africa for most of the time as the ANC was aligned to the Soviet Union while the Pan African Congress was aligned to the PRC, Taylor said.

During the mid-1970s there was a brief time when Pretoria toyed with the idea of establishing ties with China on the basis that South Africa’s main enemy was Moscow, as was China’s, and so both countries had an interest in shutting out the Soviets.

By the mid-1980s, China had become more proactive diplomatically with the ANC and of course throughout the liberation struggle on the broad diplomatic front Beijing was supportive of the general anti-apartheid struggle.

Former South African president Thabo Mbeki in 2000 expressed thanks to the Chinese government and people for their long-term support for South Africa’s struggle against apartheid. Mbeki said South Africa attaches great importance to its cooperation with China.

China has moved into direct investment in South African wine and now in recent weeks, there have been two significant Chinese investments in South Africa’s media. The private company Star Times bought TopTV, the struggling pay TV channel while the Chinese state has part-funded the purchase of Independent News and Media by the Sekunjalo consortium, including an option to take up 20% of the country’s second-largest newspaper publisher.

China’s increasing presence in South Africa is still very evident. Their interests will surely continue and expand. The expanded trade between these two countries allows South Africa an opportunity to meet its development needs. For China, the interest in South Africa as an emerging market forms part of its growing development in Africa for resources, markets, and diplomatic support.