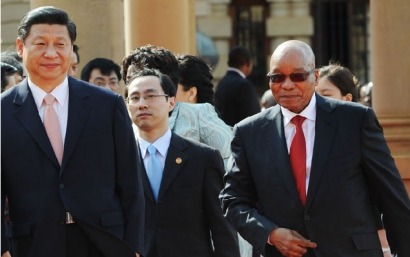 South Africa is attracting new attention from Chinese, Indian and Russian investors – including a planned visit by Chinese buyers who aim to spend R5-billion in the country later this year, says Department of Trade and Industry director-general Lionel October.

Speaking to SAnews this week, October said the Chinese government was planning to co-ordinate a buying mission for their retail trading houses and state-owned enterprises in September, and was looking at spending R5 billion in provinces across the country.

He said his department had signed a range of agreements at the BRICS (Brazil, Russia, India, China and South Africa) summit which took place in Durban in March.

These included agreements signed with China for setting up a cement plant in Limpopo province, and another with Chinese conglomerate Cherry to explore the possibility of setting up ship repair and small ship building facility in Richards Bay in KwaZulu-Natal.

In another agreement concluded at the BRICS summit, the Industrial and Commercial Bank of China (ICBC), which has a 20% share in South Africa’s Standard Bank, agreed to invest its share of dividends over the next five years in local renewable energy projects.

October said the department’s Russian counterparts had agreed during talks at the Durban summit that they would send buying missions to look at expanding purchases of South African juices and other long-shelf-life food products.
He said Russia was now the biggest market for South Africa’s citrus fruits, with 12% of citrus exports heading to Russia.

South Africa had been able to gain market share there, as European citrus is currently blighted by black-spot disease.
Meanwhile, in March, Indian conglomerate the Action Group signed an agreement to set up an agricultural export hub at the Dube Tradeport in Durban.