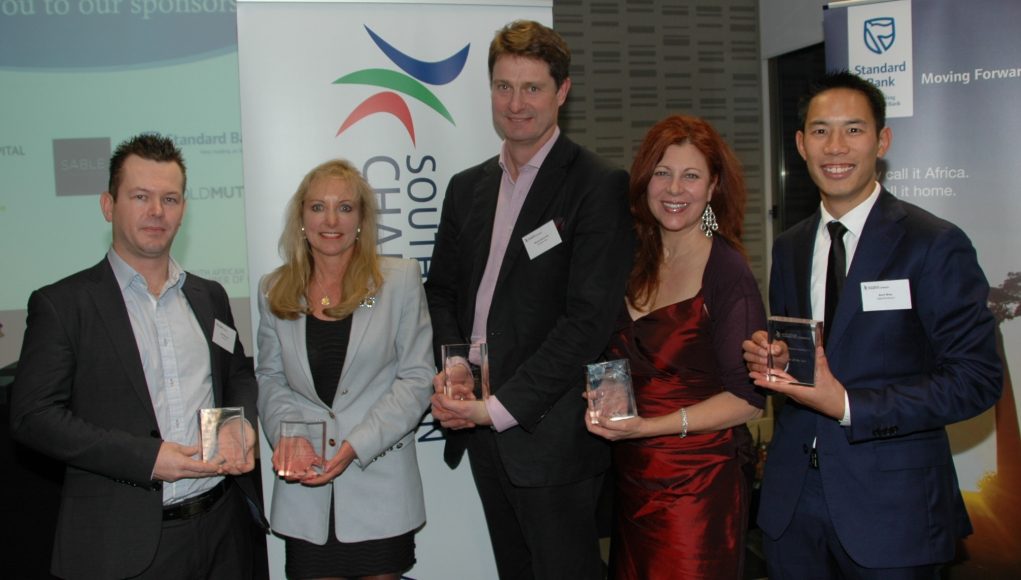 Over 150 of some of the most influential business professionals in London gathered last Thursday for this year’s annual South African Chamber of Commerce Business Awards. The event, which seeks to recognise excellence in business leadership, and the promote trade between the United Kingdom and South Africa, was held at the iconic Royal Mint in London.

The evening was opened by outgoing founder chairman, Mary-Anne Anderson, who invited the London African Gospel Choir to lead those present in singing the South African National Anthem.

Edward Griffiths, the chief executive of Saracens Rugby Club proved to be a superb host for the evening, and further demonstrated the warm relationship between the north London club and the South African community in the UK.

The standard of nominees, for 2013 was incredible high, with every category hotly contested. Nominees had been voted for on TheSouthAfrican.com website, which accounted for 30% of the vote. The judging panel was comprised established leaders in industry and some of the 2012 winners.

The winners for the evening were:

Kurt Won, winner of the Rising Star of the year award said, “I feel absolutely ecstatic and humbled to have won the Rising Star of the Year Business Award. The award itself will help build an even stronger profile for SalesPartners UK and is a testimony to the great work we do in helping entrepreneurs and business owners in growing their businesses. The South African Chamber of Commerce did an amazing job hosting the awards evening which was a great success bringing together business leaders from the South African community.”

Melissa Powys-Rodrigues, another nominee commented later, “The evening demonstrated just how much South African talent there is in London. We had captains of industry presenting awards some of the best and the brightest ex pats. The opportunity for business development between our two countries shows no bounds and we are looking forward to bigger and better things for 2014.”