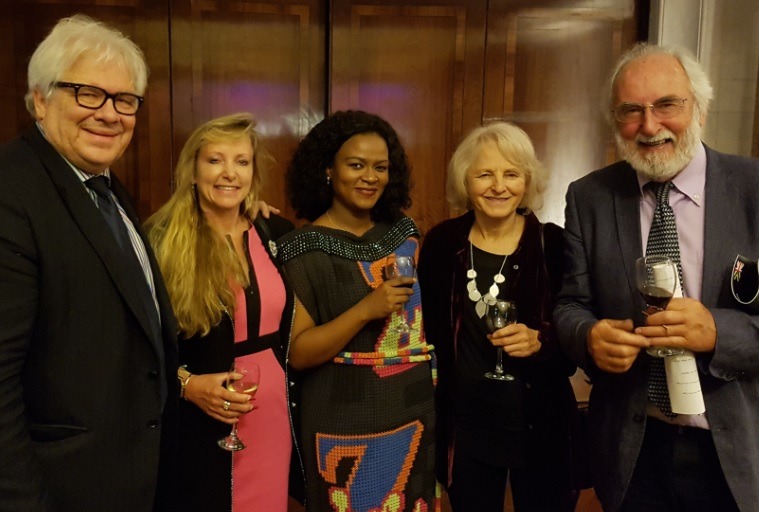 Caroline Modiba, the latest rising star in a series of South African opera stars making their mark internationally, was hailed this week by Sir Vernon Ellis, doyen of British Opera, as a soprano of exceptional talent.

Modiba, one of 12 young opera singers chosen for this year’s prestigious National Opera Studio in Britain, curated the highly acclaimed “A South African Night at the Opera” at South Africa House this week.

The 12 singers and two pianists entertained the audience to a wide range of opera classics, two traditional African songs sung by Modiba, the French Edith Piaf classic La Vie en Rose, a Lithuanian love song and old favourites such as Some Enchanted Evening and Granada.

The full ensemble closed with a stirring rendition of the National Anthem, Nkosi Sikelel’ iAfrika.

Modiba’s renditions of Thula Thula and Lakutshon’ Ilanga had the audience spellbound.

The distinguished audience of opera goers and dignitaries included Mary Oppenheimer, who sponsored Modiba’s music studies in the UK, Sir Vernon, and Betsy Ryan, sponsor of the recent exhibition – South Africa: Art of a Nation.

South African High Commissioner praised Modiba for her towering achievement and described music as “the 12th province of South Africa”.

Following the performance, which was hailed by members of the audience as a world-class event, Modiba modelled a stunning 3D-printed textile dress (see photo).

Ninety-six percent of those chosen have performed at one of the top six opera venues in the UK and 73% have attained international fame.

“Being a young artist at the National Opera Studio has been a wonderful experience,” said Modiba. “It’s been a very fulfilling journey.”

Modiba is currently coming towards the end of her studies for an Advanced postgraduate Diploma at the Birmingham Conservatoire after completing a three-year course in South Africa with the Black Tie Company.

She has won several prestigious British awards and was a finalist in the prestigious International Belvedere Singing Competition in Amsterdam and has sung leading opera roles in the UK, France and Spain.

She has qualified for the final round of the Belvedere Competition to be held in Moscow later this year.