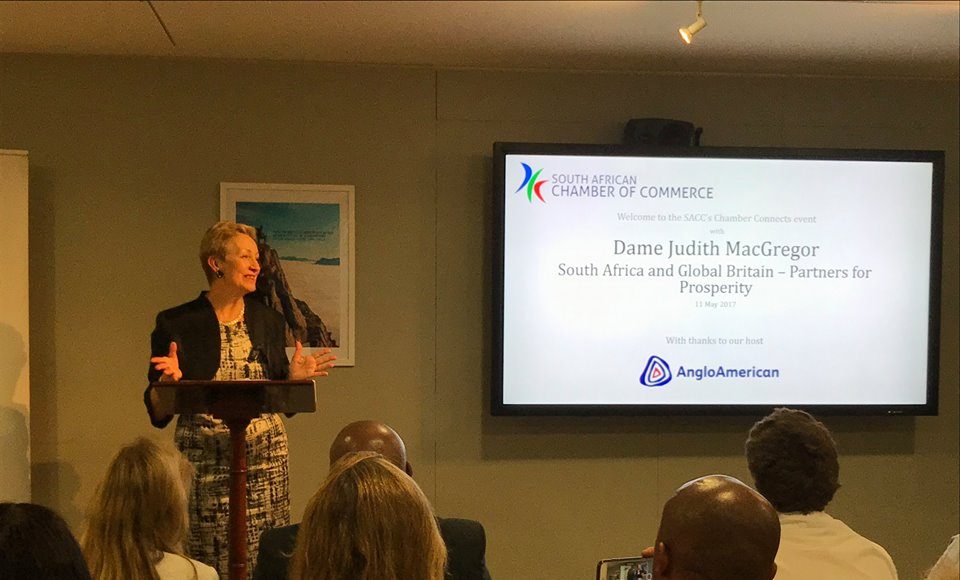 On 11th May more than 40 high-level Chamber members and their guests attended an SA Chamber Connects event hosted by Richard Morgan, head of government relations at Anglo American and addressed by Dame Judith MacGregor, the outgoing British High Commissioner to South Africa.

In an address entitled: “Global Britain and South Africa – Partners for Prosperity” Dame Judith gave a comprehensive overview of her four years in South Africa highlighting both the potential and challenges facing the country.

She emphasised the prospect of increased two-way trade and investment in the post-Brexit era and the important role that the SA Chamber in the UK and the British Chambers in South Africa could play in this process.

Dame Judith answered a wide range if questions from the floor ranging from immigration, collaboration in arts and culture, South Africa’s international positioning, the South African currency and Britain’s contribution towards education, training and development in South Africa.

The stylish Anglo American headquarters with its impressive art collection provided the perfect setting for some intense networking before and after the formal proceedings.

SACC chair Sharon Constancon said there was excellent feedback from members and guests and many requests from new membrane followed an unusually intense networking session.

READ THE ARTICLE ON EVENT WHICH APPEARED IN ‘THE SOUTH AFRICAN’ HERE.

Summary of Dame Judith’s address:
Dame Judith summarised developments affecting SA’s multi-party democracy: the shift in the ANC’s electoral dominance, the rise of the opposition especially in local government, the splits in the ANC and the strong resurgence of civil society involvement in strengthening SA’s institutions and human rights delivery alongside a new business partnership with Government (Team SA).

She noted that political and economic trends are always interwoven and the difficult state of the latter – itself a product of the former – have made more difficult (but more important) the challenging task of accelerating transformation. She said that the situation in the run-up to the ANC elections would remain volatile.

Dame Judith talked about the role the UK had played in this: particularly Britain’s work on prosperity: targeting programmes at better skills and know-how in infrastructure, energy distribution and city services alongside assistance with educational work.

The award of Chevening Scholarships had tripled during herb term as High Commissioner and 100 post-graduate scholars from both the Chevening and Commonwealth schemes went to the UK in 2016/17.

Newton Research collaboration in science also prospered hugely assisting some 70 institutions and several hundred individuals in the past two years.

Notwithstanding the difficulties, Britain’s foreign policy dialogue with SA prospered alongside a sharpened realisation post Brexit of the importance of the bilateral trade investment to both countries and a common determination to ensure this remained strong after the UK leaves the EU and the EPA.

There were also good business opportunities in many sectors: viz transport, infrastructure, city development, ICT, defence and security and innovation for example in Fintech.

Some of the dynamism in SA growth now seemed more evident in the regions and metros despite continuing policy uncertainty at the national level.

Britain’s international trade team ( DIT) in Johannesburg working closely with the British Business Chamber, now covered all of Sub Saharan Africa and could advise on opportunities.

Dame Judith said it was important for the SA Chamber at the current time to help point out the ongoing and many positive things happening in SA alongside the bad news stories and the considerable attributes of an open trading country with a strong rule of law.