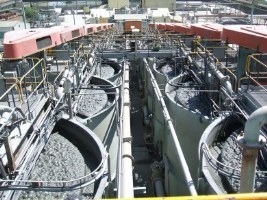 The world’s largest platinum producer – known as Amplats – with 40 percent of the global supply is in the process of finalising its results for the year 2012, during which time the company suffered a torrent of financial and political knocks.

The review is expected to show a 20 per cent decline in profits, with up to 306,000 oz in lost production during the two-month strike last year and a write down of some projects amounting $764 million.

In light of the announcement regarding the end of year review shareholders’ interest plummeted by 1.82 per cent.

About 15 per cent of Anglo American Platinum (Amplats) mines are unprofitable, and many commentators called for Anglo to divest its South African holding or at least its platinum operations.

Bank of America Merrill Lynch said, “We think a break-up of Anglo American into a South African and non-South African vehicle could release value by removing the South African overhang from the group’s international assets.”

In a second statement released by the company, Amplats proposed to postpone work on two South African mines and sell another, which will lead to a loss of 14,000 jobs.

“We are facing tough decisions to restore profitability to our operations,” states Amplats CEO Chris Griffiths. “We must evolve to align the business with our expectations of the platinum market’s long-term dynamics and address the structural changes that have eroded profitability over time.”

“By creating a sustainable, competitive and profitable business, we will be in a stronger position to continue the substantial investment, provide more secure and stable employment, and to benefit our customers, suppliers, shareholders…and the South African economy as a whole,” said Griffiths.

Anglo American new CEO Mark Cutifani is expected to ignore calls to divest Anglo American’s South African’s holding completely, as total divestment from South Africa would halve group free cash flow. He has indicated however, a willingness to consider all options. The finalised results will be released on or around 4 February.