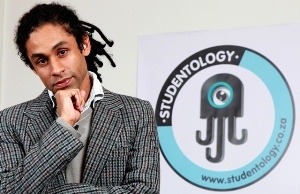 Stuart Minnaar is the face behind Studentology, an online marketing company that aims to simplify students’ lives through technological means. Now, this driven entrepreneur has developed a mobile application that could, with the help of investors, completely transform student consumer behaviour.

It has taken Stuart three years to get to the point at which his app is ready to launch. “In year one we were an online marketing company in South Africa only, [providing] info, services and sometimes products to the student market,” he explains.

“We were fortunate enough to receive grant funding from two different organisations that didn’t require us to pay them back. Year one was purely online marketing so it didn’t really generate any profits or revenue. And that was getting the market onto an online platform.”

Year two saw the release of a Studentology discount card, which enabled the company to analyse its specific market as a consumer. “That ran as a research project for almost a year. The research was to establish whether we can take the student discount card model and integrate it into a mobile app.”

And indeed, year three saw the further development of the phone app that Minnaar describes as “essentially a mobile payment application for students. It allows the student to walk into the store, access the discount…and pay for whatever they’ve purchased off the app. The entire process essentially connects their phone to the point of sale in the store.”

With the business taking up to a 5 per cent profit for every transaction completed using the app, Minnaar is pushing for it to reach 500,000 South African students. Meanwhile, multi-millionaire and possible investor Haji Chana’s eyes are firmly fixed upon the potential for global expansion.

The attention of London-based Chana came about as a result of the Silicon Cape Initiative, a non-profit and community driven project composed of technological entrepreneurs, developers and investors. “Silicon Cape is the online environment for technology start-ups in the Cape Town area,” explains Minnaar, “and they selected 11 entrepreneurs to go to London for a week and pitch to a panel of investors, specifically, the Mamba [Mentors] group.”

The Mamba Mentors are a group of U.K.-based South African expats who have built successful businesses and can offer financial backing to fellow South African entrepreneurs with bright ideas.

“Each entrepreneur got to [present] a three minute pitch to the panel which comprised four Mamba mentors,” recalls Minnaar, “and according to that, the Mamba Mentor group made a decision as to who they’d like to invest in, or which company they’re most interested in. And fortunately for me, I was one of them.”

For Haji Chana, the Mamba Mentor who left his position as principal at Blackstone Group in 2011 to launch investment and advisory firm HC Capital, good ideas are at the forefront of any venture.

“There are three stages,” explains angel investor Chana. “You have an idea stage, you have product stages, and you have a company stage.”

“I provide seed capital to young entrepreneurs to take [projects] from idea stage to product stage. Once it becomes an attractive product, that’s where I come in as a private equity investor to take it from product to company.”

For Haji Chana, reason to invest in Minnaar’s mobile app is primarily about the market opportunity. “There are two things that interest me. First is the mobile commerce market, which I think is a good market. Next he has found a niche within the mobile market for students, so in terms of if you’re looking at the whole macro-perspective from the whole market opportunity, there was a good fit.”

However, there is another monetising potential in Minnaar’s product. The data collected from the student discount card not only records spending habits, but as Minnaar explains, also provides a pool of information that after three years becomes “a data bank of graduates that we can plug different services into.”

“If I do come in on the board of directors, my first mandate will be, I’ll get the funding to make sure that every student in South Africa uses this. Once we get the largest market in South Africa, I want to launch in other countries within the African region, but at the same time I also want to get into partnership in regions from Asia to South America,” says Chana.

Chana’s sights for the Studentology app are evidently grand – but the product is still in early stages. Both Chana and Minnaar contend that any funding from the Mamba Mentors would predominantly ensure Studentology’s capacity for growth.

“The working capital,” states Chana, “that’s where the angel investment and seed capital comes in…so the first thing this investment will go into is hiring work force, getting the internal team [in place].”

“So what that would mean,” explains Minnaar, “is for us to set up 3 additional offices in the parts of East Africa where there is a big student population, to get more students and venues on board.”

“So my costs essentially sit around staff, personnel and office structure: one person in each market to do a bit of analysis around the data. We don’t have big operational costs or the need for equipment and infrastructure. We literally have a server that we have to pay for.”

And of course, a further step towards widespread use of the app would comprise of a serious investment in marketing and advertising. “That’s why we’re focusing on the student market,” explains Minnaar. “If you look at the Facebook model, it works quite well if you use one market that’s quite captive, quite uniform on a campus from 8am to 5pm, marketing becomes easier. [Secondly,] the market is very adaptive to new technologies.”

“Let’s say for argument’s sake we didn’t deal with the student market and we used an open market, and used parents [as a] potential in that market. They’re not that tech savvy, they don’t specifically have smart phones, and the traction to get people on board would be a lot more difficult.”

Studentology’s revenue sits in the transactional procedure that occurs with use of the app. “So our projections now – obviously with assistance from Mamba group – our target is to have 100,000 students using the app [in its first year]. The average spend per month of a student is about 250 Rand [US$30] and we take between 3 and 5 per cent profit per transaction.”

“What we’ve projected at the end of year one [with this new investment], our turnover should be around R6m [US$696,500]. So year two our end target is to have 500,000 users, which makes it a very profitable business.”

With regards to an investment from the Mamba Mentors, Minnaar explains, “we decided on a 45 per cent equity split on a ratchet model. If we hit certain targets or milestones by the end of the year, the company gets 10 per cent back. So there’s a growth model plugged into that to ensure that after 3 years, whatever they’ve invested in could be returned.”

On the high-risk nature of angel investments, Chana confesses to being “very picky”. “Angel investments are on a personal level,” he explains. “What’s important is they have to be a good fit…there has to be a good relationship between myself and the founder.”

As his potential “angel”, Chana praises Minnaar’s attributes. “He’s not depending on anyone, he’s making his own fortunes. You have to have that tenacity and persistence.” Still though, there is much to consider before investing.

“It’s not just the money,” Chana continues. “Can I mentor him, can I be a strategic investor? In investment terms it’s called smart money. It’s not just writing a cheque…I personally am an entrepreneur as well. I have my own company, what we do is build ideas within our own company itself.”

So what does Haji Chana consider to be the three things somebody needs to get to the final stage? “First the ideas have to be innovative or disruptive. Disrupt an old traditional media. Second thing is, it has the potential to be a large business. And the third thing is, it’s the founder and the team, and I normally like to invest in companies of two people, because it’s better to have two founders, and not one.”