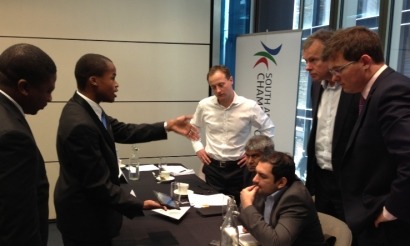 The session, held at the Standard Bank London offices in the City, saw
the regular Mambas – Haji Chana, Adam Laird, Reg Bamford and James
Durrant – being joined by a guest investor. Naresh Singh, head of
global QC at Eskom UK and a board member of the South African Chamber
of Commerce, came along to put the ideas to the test.

The session saw at least two extremely promising ideas emerging. First
up was Phumlani Gouws of Meridict Systems. Gouws’ company is a
communications firm, one of only 22 companies in South Africa to hold
IECN and IECS licenses.

But it was the idea of Sowertech that proved the most eyebrow-raising.
Obakent Matlhoko and Nathi Shabalala have developed an app, AFTA
ROBOT, designed for minibus taxi services in South Africa – currently
the most widespread form of public transport in the country. The name
itself is a reference to the command one gives to the driver to pull
over and let passengers out.

Durrant, also the Founder of Mamba Mentors, says that while the
projects showed promise, there was a lot to do before any of them saw
the Mambas bite. “There was interest in some of the projects but don’t
know who is likely to get investment at this stage,” Durrant said.
“But as always, it was a fascinating session, and there were plenty of
good ideas. The involvement of BT and MEDO is certainly a step in the
right direction, and for our next event we’re hoping to bring the
London School of Business and Finance onboard.”

BT Global Services is a division of the telecoms company BT Group,
which provides communication technology to organisations across the
planet. MEDO specialises in enterprise development, and in connecting
entrepreneurs with corporates.