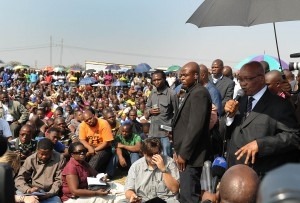 As collective wage negotiations are nearing, many worry that it will be difficult to avoid a repetition of last year’s deadly strikes.

The largest private sector union, the National Union of Mineworkers (NUM) has announced it will demand double-digit wage increases.

“It’s going to be very tough, perhaps one of the very toughest collective bargaining (rounds), since the attainment of democracy,” said Crispen Chinguno a sociology fellow at the University of Witwatersrand, who specialises in strike violence.

The gloomy predictions are based on a combination of factors including the country’s difficult economic situation, last year’s success of strikers, who eventually got the wage increases they demanded as employers needed to end the protests, and the anger about deadly events last summer.

In August 2012, 44 strikers were killed at Marikana and nearly 80 injured in clashes with the police and struggles between rival trade unions, NUM and Association of Mineworkers and Construction Union (AMCU).

“The perception among workers that wildcat strikes are an effective and legitimate means of seeking wage concessions will increase their prevalence and intensity,” said Charles Laurie, an Africa analyst at Britain’s Maplecroft, Global Risk Analytics.

NUM said that difficult business conditions: “should not be used as an excuse or bargaining chip to award workers lower pay or threaten them with dismissals.”

Amplats one of the biggest global platinum producers, Anglo American Platinum, is expected to announce plans to slash as many as 14 000 jobs next week, as the company, facing low prices of platinum, cuts costs. However, Anglo told Gateway to Africa that they would endeavour to re-deploy redundant miners elsewhere.

“Strike season,” has become an annual event in South Africa, when labourers as well as the unemployed take to the streets.