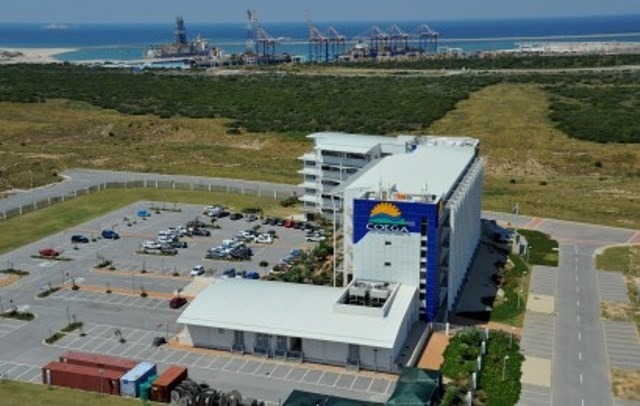 The Coega industrial development zone (IDZ) covering 110 km² of land is situated within the Nelson Mandela Metropolitan Municipality near Port Elizabeth, in the Eastern Cape province of South Africa. Coega is one of three major IDZs in the country, all of which are government-funded and aimed at increasing jobs, trade and investment in South Africa.

The initial development phase to put all the infrastructure in place took 6 to 7 years. This involved ensuring that services such as water, electricity, sanitation, roads were all put in place.

Once the infrastructure was set up, the second phase, which began in 2007, involved the process of attracting investors into the IDZ. “So, that process started with a very aggressive drive towards securing tenant[s], as well as attracting other investors into the zone. We are in that particular process even now” says Vilakazi.

“We don’t have a major anchor tenant, but our model is that we want to create opportunities for industrialists, people who want to build industries and big plants and factories in the IDZ.”

The next phase
“The next phase of the IDZ in terms of investors is to grow their businesses in the zone, but also to ensure that the zone remains sustainable from a funding perspective,” says Vilakazi. This involves attracting investors who are going to create more jobs and who undertake to train more local people, as well as creating opportunities for small businesses in the Eastern Cape.

Diversification
In addition to attracting more investors into the zone and training up more people, Coega has now started the process of diversifying their business. This involved looking at external services.
“We have quite a high concentration of civil engineers, architects and very professional skilled people who have been part of the development on the IDZ,” explains Vilakazi. “And now that the IDZ is almost one hundred per cent developed, in terms of the infrastructure on the ground, you then have a large [talent] pool, which we are using [elsewhere].”

Once the IDZ was completed, the Coega Development Corporation realised that the environment had changed. “It became very clear to us that [we stood to lose] these skilled people, to wherever they may have come from, and [their] skills, that the province so needs…we then took a decision to say: ‘We’re going to retain the skills within the province, within the organisation and we’re going to utilise these skills on new projects.’”

“So it’s not something that I would say…we knew we were going to embark upon, but to ensure that [Coega] remained sustainable and [because it] developed these people and trained them, we were determined to ensure that we retained such skills and utilised them on other projects for the IDZ.”
As a result, on the external services side, Coega are now an implementing agent for infrastructure development programmes across the country, and particularly for the Department of Roads and Public Works in the Eastern Cape.

In addition to assisting in road building and maintenance in the Eastern Cape, Coega’s engineers are helping to build infrastructure for the Departments of Education and Health in KwaZulu-Natal. In the province, Coega is building new schools, roads and bridges as well as refurbishing existing roads and hospitals. These external services are now used to generate sufficient revenue for the IDZ.

Attracting investors
There are around 21 major investors into the IDZ to date, and others are about to buy in, like FAW, the giant Chinese vehicle manufacturing company. The automotive sector is one which Coega is looking to attract to the zone. And Vilakazi adds: “We are focusing very much on the Chinese market in attracting more Chinese investors to locate their businesses in the IDZ.”

Other key tenants at Coega include: Famous Brands (in the food retail sector) and Air Products South Africa, a gas distributor and manufacturer of energy-related products. The food producer Dynamic Commodities, and the Coega Dairy, which supplies supermarket giant Shoprite, demonstrate the range of different companies operating from the zone.

The Coega Dairy is a good example of the synergies taking place at Coega, where they have entered into an agri-processing joint venture with Famous Brands to produce cheese in the IDZ.

Another interesting partnership is a joint venture between Coega and a German company to produce wind turbines at the IDZ. “In fact, the wind turbine at Coega was used to supply electricity at the 2010 World Cup, to the Nelson Mandela Bay Stadium [which hosted FIFA matches]. So energy is an important area,” continues Vilakazi, who adds that logistics are another important sector, as is business process outsourcing.

“In a nutshell, we attract companies of various sizes, so that they can locate. There are projects in the pipeline which are equally big, if not bigger. Petro SA is planning to build a refinery in the Coega IDZ, and that is estimated to be about a ZAR 70bn project and [if completed would be] the biggest oil refinery in Africa, producing something like 326,000 barrels a day.”

Another major project involves the construction of a smelter, estimated to cost close to ZAR 70bn. “But,” says Vilakazi “there are also other projects, which are looking at beneficiating, instead of just exporting raw materials…some of the goods will be exported either as semi-finished or as finished products. So from an investor’s point of view that is what we have.”

Vilakazi admits that Coega has not yet witnessed a massive influx of oil and gas business from further up the east and west coasts of Southern Africa. But, as he says: “I think a lot of the interest revolves around the value chain that results from having a refinery and getting companies that are interested in Africa, to relocate here from elsewhere, because of the refinery and the smelter.”

“Most of our investors…are actually local investors – ‘local’ meaning they’re actually African investors in South Africa. So there is a general interest and confidence among South Africans and some small parts of Africa that are locating their businesses here because they believe in the IDZ, that it has the potential.”

“So, I do expect that there will be quite an influx and a huge interest from the rest of Africa to locate their businesses in the IDZ,” Vilakazi predicts. To quote the American author James Earl Jones: ‘People will most definitely come.’