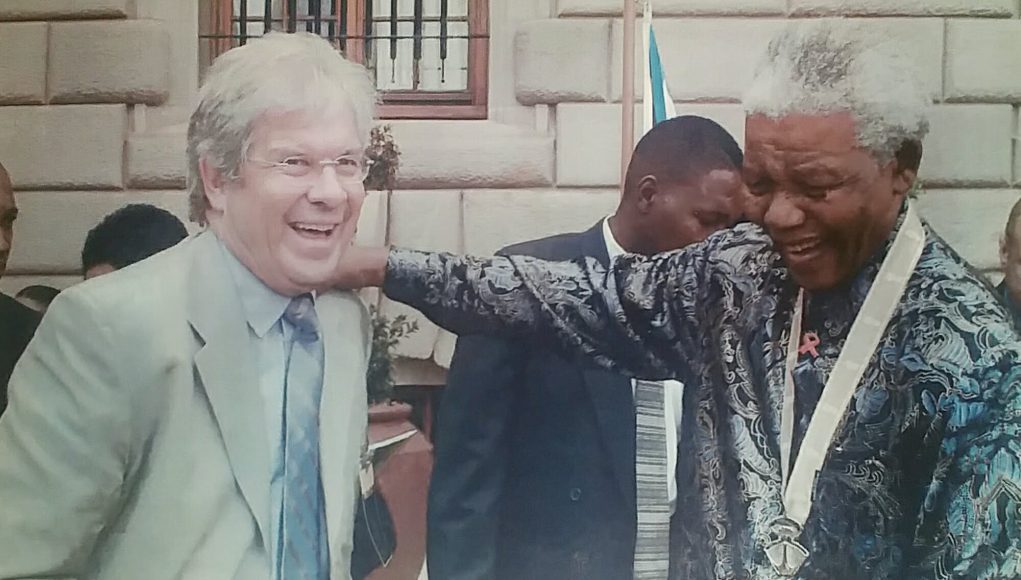 In celebration of Nelson Mandela Day on 18 July, SACC Director & journalist, John Battersby draws on his many interviews with Mandela to share some ”Lessons from Mandela’s Life”

I never cease to be amazed how hungry people are for anecdotes from personal interactions with Nelson Rolihlahla Mandela – and how one person could have inspired so many people and changed the world so profoundly. After sharing my memories of Mandela in public and having participated in several panel discussions about the mindset of Madiba, I have concluded that the insatiable public appetite stems from his towering human achievements in transforming adversity into triumph and changing himself fundamentally.

What immediately struck those who came into contact with Mandela was his ability to focus his whole being on those he was interacting with. Mandela was able to immediately connect with the humanity in every person he encountered. It was this attribute which transformed the lives of many who had the privilege of meeting him. I was very fortunate to have been a foreign correspondent and then a newspaper editor in South Africa at the time of Mandela’s release and then the decade that saw democracy negotiations lead to him serving for five years as the first black President. This was an achievement born of hardship coupled with the pain of isolation from his family and loved ones.

While Mandela’s life goals were clear, his life choices often led to paradoxes in his personal and public life. Mandela’s ability to change himself during those long prison years in line with the vision held during his period as an activist and freedom fighter enabled him to achieve his core objective of liberating South Africa. Furthermore, it also made him capable of inspiring humanity as a whole and encouraged people to achieve their dreams.

Mandela was always mindful that his leadership role in the liberation of South Africa from apartheid might not have been possible if he had not been imprisoned. ‘It is possible that if I had not gone to jail and been able to read and listen to the stories of many people…I might not have learned these things,’ Mandela said of the insights that he gained during his 27 years of incarceration.

In an interview less than a year after he had stepped down as the country’s first black president, Mandela shared with me reflections of how prison had changed him. Mandela believed that reading the biographies of great leaders who had been able to overcome their shortcomings and rise to do great things had inspired him. Those biographies included those of Mahatma Gandhi, Martin Luther King and Winston Churchill.

Mandela said reading about them also helped him to realize that behind every seemingly ordinary person lay the potential of greatness. He believed that prison gave him time to think about the times when he had failed to acknowledge people who had been kind to him.

Mandela recalled that at the height of the anti-apartheid struggle, he and other leaders were understandably angry at the humiliation and loss of dignity of those who suffered under the unjust policy. As a result their actions were driven by anger and emotion rather than by reflection and consultation. ‘But in jail – especially for those who stayed in single cells – you had enough opportunity to sit down and think,’ he said.

Another lesson from Mandela’s experiences was that if you have an objective in life, then one must concentrate on that. This includes not infighting with your opponents. Mandela stated: ‘You want to create an atmosphere where you can move everybody toward the goal you have set for yourself’. Mandela also said that he had learned that when you had the moral high ground, it was better to sit down and talk to people and persuade them of the correctness of your cause rather than trying to impose your ideas.

In his twilight years, Mandela was at pains to publicly acknowledge his weaknesses and shortcomings in his relationships with women (including his first wife Evelyn) and his family life. Mandela was keen to dispel any notion of sainthood that might be bestowed on him. He also spoke increasingly about the importance of changing oneself.

‘One of the most difficult things is not to change society but to change yourself,’ said Mandela while giving a tribute to billionaire businessman Douw Steyn. He had made his Johannesburg residence available to Mandela as a retreat after his prison release in 1990.

Mandela gave similar advice to his wife Winnie in a letter he wrote in 1981 after she had been jailed by the apartheid regime. He wrote that there were qualities ‘in each one of us’ that form the basis of our spiritual life and that we can change ourselves by observing our reactions to the unfolding of life.

The power of Mandela’s leadership was rooted in the fact that at key moments in his life he acted independently of the movement to which he dedicated his life and to which he deferred as a ‘loyal and obedient’ member. He did so in 1986 when he decided to begin negotiating with his jailers from behind bars not knowing where it would end. He did so in continuing to refer to former President F. W. de Klerk as a ‘man of integrity’ long after it was unpopular to do so in the ranks of the African National Congress. And he did so again when he went out on a limb within his own constituency, after his release, to support the overwhelmingly white South African team in the 1995 Rugby Union World Cup.

Mandela said that he could not bind future generations to remember history in a particular way even if he wanted to. And so it was not up to him to say what his legacy would be. The lesson of Mandela’s life is that he had no need to bind anyone to his legacy nor did he need any organization to do so.

His actions in his own lifetime are his legacy. They will remain indelibly etched in history for generations to come as a timeless example to inspire the leaders of tomorrow.

Editor’s note: John Battersby served as a correspondent for The New York Times (1987-89) and the Christian Science Monitor (1989-96) before, during and after South Africa’s transition to democracy. He was editor of The Sunday Independent in Johannesburg from 1996 to 2001. He interviewed Mandela on numerous occasions and is coauthor of “Nelson Mandela: A Life in Photographs” (Sterling, 2009) and author of the afterword in the updated version of “Mandela: the Authorized Biography” (Harper Collins, 2011).

Parts of this blog were originally published by John Battersby in the Christian Science Monitor and on the CNN website following Mandela’s death on 5 December 2013.