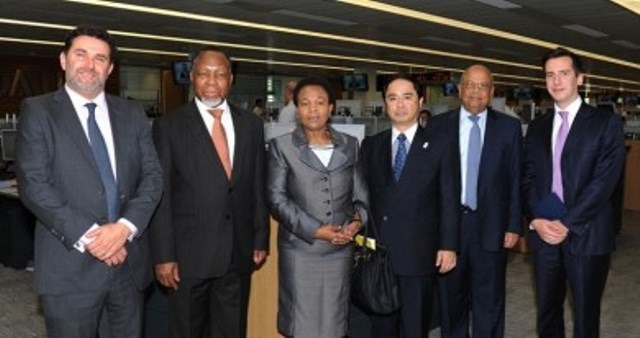 Despite tensions over proposed legislation aimed at encouraging mining companies to sell part of their raw material to manufacturers for value-added “beneficiation”, there was a willingness to listen to government’s case about the way past inequalities still fuelled instability in the industry.

The delegation leaders made it clear that the draft legislation was not written in stone and government was prepared to listen to proposals for amendments to sections which give the Mineral Resources Minister discretionary power to force companies to sell raw materials at a price determined by the state.

Since the Marikana tragedy in August last year when 34 miners were killed after Lonmin’s platinum mine negotiated separate pay increases for rock-drill operators, there has been little or no new foreign investment in the mining sector and its performance has dropped well below levels in other mining countries.

The ruling African National Congress decided against nationalisation of the mines at its five-yearly conference last year and has since also shelved a proposed additional tax on profits for fear of alienating investors and “killing the goose that lays the golden egg.”

The focus in the industry is now on the new legislation which seeks to ensure that more of South Africa’ s mining wealth remains inside the country for purposes of development, creating jobs, fighting poverty and ensuring that those communities which contribute to mining wealth see some of the benefits.

This overall objective remains a non-negotiable for government. What remains unresolved is how it is going to be achieved.

Both the Deputy President and the Mineral Resources Minister spent time explaining to the mine bosses and institutional investors that given South Africa’s past and the gross distortions created by the 1913 Land Act, the migrant labour system and the Bantu education system, it was not an option to return to business as usual.

Gordhan said that there needed to be a new relationship throughout the continent and the developing world between mining companies and the countries and communities in which they operated which acknowledged and rectified these past injustices.

“Rent from mining commodities must make a contribution to a fiscal base for education, training and development,” said Gordhan.

“There needs to be a bias towards investment rather than consumption,” he said.

Minister Shabangu said that the 1913 Land Act had allocated 87% of the land to the white minority and only 13% to the black majority, but it had driven black people off their land so that they could be put to work on the mines.

Deputy President Motlanthe said the migrant labour system had institutionalised inhumane practices which separated men from their families and forced them to live in abject conditions in the vicinity of the mines.

Motlanthe indicated that the scrapping of the migrant labour system was a subject of active and ongoing discussion between the government and the mining companies.

Instead of a system where miners leave their rural homes to live and work in far-flung mining areas far from their families for months on end, proposals were under consideration whereby miners would be able to have shorter, say eight week, work cycle and take two weeks off to be with their families.

This would enable them to maintain closer bonds with their families and prevent the creation of two parallel households which was both financially unsustainable and also socially destructive.