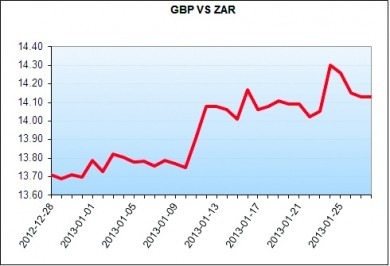 Last week, the South African Rand slumped to a four-year low against the US Dollar on a wave of negative investor sentiment. The currencies’ performance against the British Pound was no better- with the Rand touching a low of 14.382 on the 24th. It managed to recover some ground by Friday, where it settled around the 14.13 mark for the weekend.

The Rand had started the week off on the back foot, already trading at over R14 to the Pound, and continued to take a beating on the back of continuing violent labour unrest in the mining and agricultural sector. Harmony Gold Mining, the country’s third largest gold producer, announced the closure of one of its’ mines until agreements had been reached with labour forces. Anglo Platinum, in a bid to maintain operational efficiency, announced a restructuring programme, including the closure and sale of three mine shafts, which would result in the loss of around 14,000 jobs.

At the nations’ Monetary Policy Committee meeting, Reserve Bank governor Gill Marcus announced that the repo rate would remain unchanged from 5%, and expressed concern over the state of the Rand- citing a flimsy balance of payments as a reason for sudden fluctuations in the currency.

The Rand began trading this week slightly stronger, as Eurozone sentiment improved, thereby making SA look slightly more attractive to the risk-taking investor. For the week ahead, the currency will likely find direction from any developments in the ongoing labour unrest, as well as any positive news from the Eurozone.