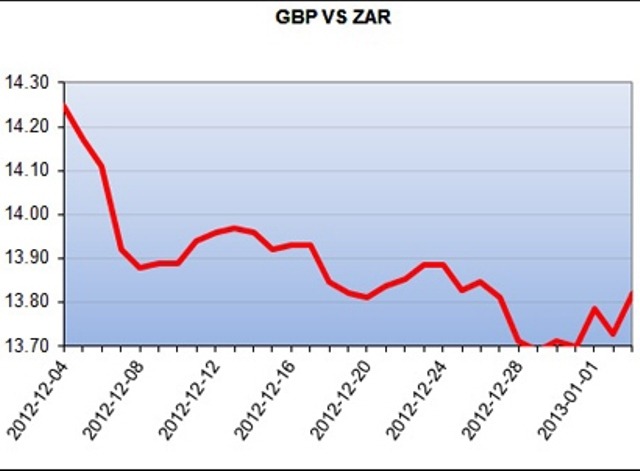 “The Rand and the gold price decoupled many months ago and now it is the turn for the Rand and equity markets to decouple as equity markets retreat after posting all-time highs‚ yet the rand continues to strengthen‚” Mark Kalkwarf Iquad Group (Fin 24).

The Rand was steady against the Dollar at the start of the week. It was however weaker than the R8.80 resistance level it broke last week. The Rand was slightly stronger in afternoon trade, but overall trade on Monday was quieter as the US markets were closed for a national holiday.

The Rand to lost ground against the Dollar in midday trade on Tuesday‚ as the market reacted to news of labour unrest at Anglo Platinum’s Siphumelele mine in Rustenburg.

Wednesday saw the Rand trading stronger against major currencies, following renewed confidence out of Germany and CPI figures for January coming in below expectations. South Africa’s CPI came in below expectation at 5.4% year on year in January‚ after measuring 5.7% year-on-year in December.

The Rand lost ground on Thursday following news that the third round of US quantitative easing could end earlier than previously thought.

Friday however, saw the Rand slightly firmer against major currencies in midmorning trade. The currency was steady amid a lack of new drivers.

The Rand weakened early on Monday and looked likely to come under more pressure this week if domestic economic data comes in weaker than market expectations.

:: Note: The above exchange rates are based on “interbank” rates.

The SA Chamber of Commerce is an umbrella organisation and conduit for trade, community and investment into and out of South Africa. The SACC aims to bring under one concerted effort, a forum and meeting point for businesses who have an interest in both the UK and South Africa in an attempt to facilitate the development of business opportunities.
Contact us: [email protected]chamber.co.uk
© South African Chamber of Commerce (UK) 2020
We use cookies to ensure that we give you the best experience on our website. If you continue to use this site we will assume that you are happy with it. Ok