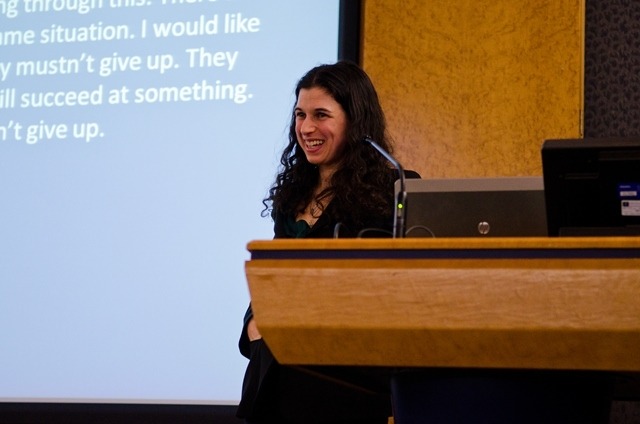 The South African Chamber of Commerce First Wednesday talk at Deloitte LLP was delivered by Dr Lucie Cluver, a South African social worker who works with the government and the UN on the issue of Aids-affected children in South Africa.

Dr Cluver is a university lecturer and Fellow of Wolfson College at Oxford University and works for the Department of Social Policy and Intervention. She also lectures at the University of Cape Town. Cluver has worked closely with the South African government with the goal of providing relief for Aids-affected children. She acts as an advisor to Unicef, USAid, Save the Children and the World Health Organisation.

Her story started with meeting an “ANC spy who had been on death row for six years” and then going on to meet current high commissioner to the UK Dr Zola Skweyiya, who at the time was minister of social development and had the opportunity to propose policy changes in Parliament.

The South African government asked for evidence to guide their actions because they want to check what is likely to work before they take action and spend millions of rands on solutions. What has been proven to work is better medication and providing children with cash transfers from organisations such as USAid, in order to feed themselves and address their daily ordeals. Grants and free school meals were found to reduce the risk or transactional sex.

Cluver’s approach has been one of collaborative research, using forms filled out by children and teenagers to measure their progress. A shocking estimated seven million children in South Africa are orphaned by Aids or living with Aids-unwell caregivers. She showed in her presentation the new data from two studies, both taking place in close collaboration with the government: the developing world’s first longitudinal study of the impacts of parental HIV/Aids illness and death, following 1000 children in over four years; and the national ‘Young Carers study’, following 6,850 children and 2,600 matched child-primary caregiver pairs over one year.

The children in Aids-affected families often feel “isolated and stigmatised”.

Cluver found that Aids-sick caregivers do worse than other caregivers and have higher levels of anxiety, even while they are at school. If they are “dual-affected” i.e. more than one adult in their family is Aids-affected, then children often miss school because they have to collect meds or spend time caring for others. There are sometimes treble the levels of female child transactional sex due to the necessity to get income to buy the basics they need to survive. There is consequently a cumulative risk of them getting AIDS.

She explained that this also led to child abuse by parents with Aids increasing as they were often poor, hungry, worried and unable to care for their own children.

The next steps taken to address the Aids epidemic were to set up the Sinovuyo Caring Families Project and ART, a sexual health service that provides multiple pills that need to be taken daily. However, sometimes there is only a 20% pill adherence and pills that have been dispensed are not taken because of side effects such as drowsiness and incoherence in some patients.

The good news is that the mortality rate is going down. The worldwide average for access to meds is 50% but in South Africa that has increased to 52% access to meds. The ideal would be to test early enough so that they can be cured rather than waiting until it is too late to seek help. Post-exposure prophylaxis, taking meds within 72 hours after the infection, for a month or longer, has also helped.

Dr Cluver said that charities such as Starfish and FoodBank are making inroads but there needs to be a bringing together of all of the organisations. The economic impact on the GDP is negative but this is complicated by South Africa having a lower rate of employment so you cannot always tell how much of this is caused by Aids.

Changes from an academic education to a more vocational education for Aids-affected children are being considered by the Social Inclusion Department and there are three bands of schooling, some of which focus on the community, such as growing vegetable patches.

There can be a negative impact based on superstition, myths and fears resulting in some people risking going to a traditional healer who may live closer to their homes and then being able to access low cost traditional medicine rather than getting scientific meds.

At the end of the presentation, during a Q&A session, there was a debate about how South African policy-makers, researchers and civil society can best work together to provide effective interventions for an Aids-affected generation.

When the question was raised by an audience member, Cluver agreed that one solution may be to get more support from the pharmaceutical companies supplying antiretrovirals. However, this is a grey area because of trademarks on antiretrovirals as well as legal and illegal generics in use, which can pose a risk. These can have a major impact on Aids-affected children.