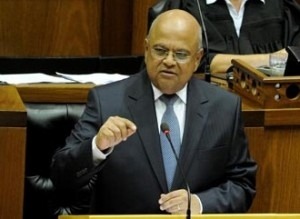 This information is aimed at helping to trace South Africa’s tax evaders abroad including locals, expats and international businessmen, according to Finance Minister Pravin Gordhan.

Gordhan said that the tax authorities of South Africa and other countries suffering from fiscal instability had gained a “significant” amount of data revealing trusts and companies holding assets for residents in jurisdictions worldwide. His remarks came on Thursday in a written reply to a parliamentary question from Inkatha Freedom Party MP Narend Singh.

“The data contain both the identities of the individual owners of these entities as well as the advisers who assisted in establishing the structures,” Gordhan said.

He added that in combatting tax evasion seven main areas will be targeted: large businesses and transfer pricing, the construction industry, wealthy individuals and their associated trusts, illicit cigarettes, clothing and textiles, small businesses, and tax practitioners and trade intermediaries.

Tax evasion and aggressive tax avoidance was, according to Gordhan, a ”major problem” that undermined South Africa’s and other countries’ fiscal stability in the ongoing process of recovery from the 2008 financial crisis.

He warned that the biggest obstacle in finding the relevant information for SARS would be the magnitude and complexity of the obtained data.

The Finance Minister assessed that it was “extremely difficult,” to determine the extent to which tax havens were used: “The structures used range from the simple to the extremely complex, requiring the commitment of skilled resources over extended periods of time to unravel.”

In May 2013, SARS commissioner Oupa Magashula said Oxfam International estimated that financial outflows from around Africa in the form of tax evasion and trade mispricing by extractive industries were estimated at $200 billion (about R1.8 trillion) every year.

South Africa has negotiated as many as 76 double taxation agreements – which provide an exchange of tax information – and nine tax information exchange agreements. It has also signed the Organisation for Economic Co-operation and Development and Council of Europe’s Convention on Mutual Administrative Assistance in Tax Matters.

Another eight double taxation agreements and 11 tax information exchange agreements are being negotiated.