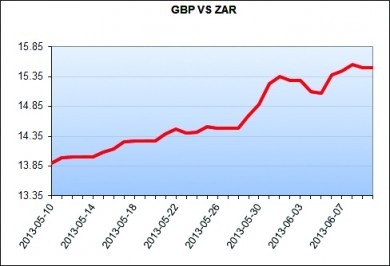 The Rand began trading at around 15.5 to the British Pound last Monday and around 9.97 against the US Dollar. The Rand weakened against both currencies towards the middle of the week and then strengthened again to close at 15.47 to the Pound and 9.94 to Dollar.

The Rand strengthened in late trade on Thursday despite good US data that boosted the dollar against the EURO.

Slower growth in Europe, where a debt crisis that began more than two years ago may lead to Greece leaving the monetary union, is curbing demand from a region that buys about a fifth of South African exports. In his budget speech on Feb. 22, Gordhan cut his growth forecast this year to 2.7 per cent from an earlier estimate of 3.4 per cent. There is no evidence that Europe will solve its problems in the near future, and South Africa has to restructure its own economy to address structural constraints.

The rapid growth, now seen in many countries in Africa will slow, and some countries in Southern Africa, particularly South Africa could see economic declines as was the case in 2008. While the effects of a European crisis will be greater in Africa than the 2008 GFC, with the exception of South Africa the impact will not be as great as other regions that are more exposed to default risk in European financial markets. Still, African leaders cannot afford to ignore the developments of Greece this weekend. If indeed Greece does default, governments in Africa will need to immediately begin to reduce spending and look for ways to diversify trading partners within the region and with other nations in the developing world.