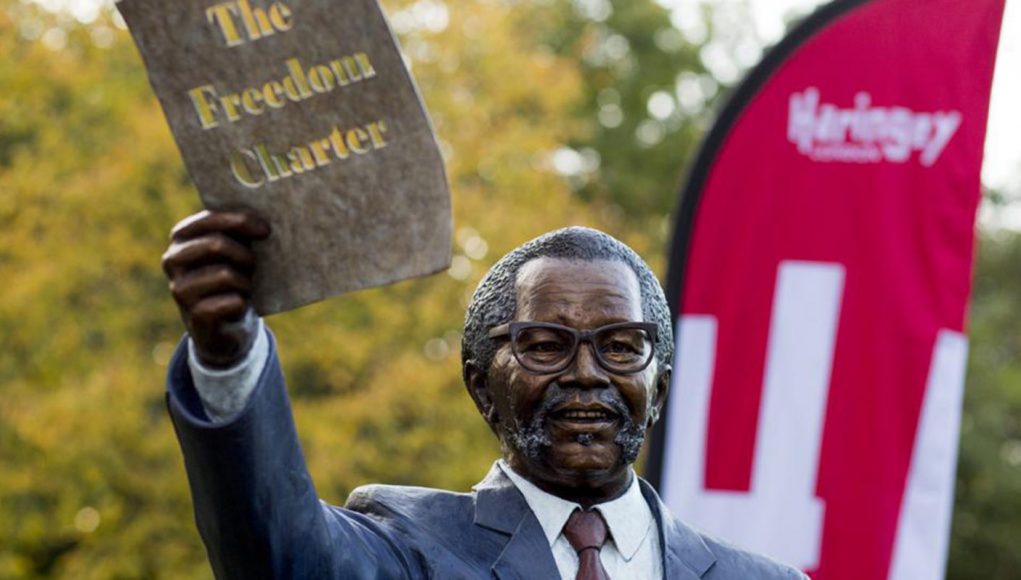 The unveiling of a statue of Oliver Tambo in north London’s Borough of Haringey brought back memories of the day in 1985 when former Cape Times editor Tony Heard and John Battersby met the exiled ANC leader in his Muswell Hill home 34 years earlier.

Visitors to the Albert Road Park and Sports Centre in north London’s Borough of Haringey are met on entry by a life-size and astonishingly lifelike statue of Oliver Reginald Tambo, the former leader of the African National Congress who sustained the organisation for three decades in exile.

It is so real that one’s first instinct is to reach out and touch to make doubly sure.

For a moment it was as though the calm and resolute leader I had met and listened to in his Muswell Hill home 34 years earlier – almost to the day (30 October 1985) – had come back to life.

Memories of that day came flooding back as the singers and dancers got the event under way in true South African style.

In 1985 I had accompanied then Cape Times editor Tony Heard from my London base to conduct an interview which gave South Africans an opportunity to hear Tambo’s views and implacable opposition to apartheid for the first time in three decades.

It was a watershed moment which followed by a month the groundbreaking ANC talks in Lusaka with a delegation headed by leading industrialist Gavin Relly.

The two events – both in defiance of South African laws outlawing Tambo and the ANC – segued into a series of historic contacts and exchanges between South African leaders and the ANC, serial safaris to Lusaka and Van Zyl Slabbert’s defiant mission to meet an ANC delegation in Senegal.

Heard was not as fortunate as Relly. He was arrested and charged for breaking the law. Two years later he was fired from his editor’s post after being awarded the Golden Pen Award by the World Association of Newspapers and Newspaper Publishers.

As Heard recalls in his book, The Cape of Storms, Tambo laid out his stall for future negotiations.

Tambo urged the apartheid government to create a climate for talks and raised the possibility of a truce and the opening of talks, before violence had ceased. He said civilian targets would not be deliberately targeted but some could be caught in the crossfire if violence escalated.

Tambo came out in favour of a mixed economy and embraced whites as full citizens on a par with black South Africans.

But he did not think that the government of PW Botha was ready for talks.

“Tambo spoke in slow, measured tones and he never got a thought or word misplaced,” Heard said.

Talks with Mandela in jail began in 1986 and several tracks between the ANC and the Afrikaner establishment were set up in the UK and Switzerland.

The Dakar safari – as the Slabbert mission was dubbed – became an ice-breaker and curtain-raiser in the series of events leading to the unbanning of the ANC and SA Communist Party in February 1990 and the negotiated settlement in 1994 and new Constitution adopted in 1996.

Throughout the run-up to negotiations, the quiet hand of Oliver Tambo could be seen keeping the process on track.

These were the thoughts racing through my mind as the dignitaries gathered around the statue still clad in a black cloth awaiting the unveiling.

The statue is the work of a team of artists and technicians under the leadership of Dali Tambo, Oliver Tambo’s son.

It was unveiled at a ceremony attended by his eldest daughter, Nomatemba Tambo, currently the South African High Commissioner to the UK, who paid tribute to the values and example of her father.

Like the man it portrays, the statue is cast in iron but has an inviting ambience in its outreaching pose and modest but celebratory smile.

The statue captures the humility of a man with total integrity, unbending resolve and a compassion which won him the love and respect of all who came into contact with him.

High Commissioner Tambo quoted at length from a tribute to her father made by President Cyril Ramaphosa at Tamboville Cemetery in Brakpan on the same day. (Sunday 27 October)

As Ramaphosa observed, OR Tambo was a devout Christian, a dedicated member of the Anglican Church and had been an altar boy. He later studied for the priesthood before turning to law.

Tambo’s father had impressed upon him the supreme importance of education and had taken his father’s advice and dedicated himself to his studies, performing all the tasks assigned to him and excelling at school.

“OR Tambo saw it as the revolutionary duty of students to excel academically, graduate in time and create space for others,” said Ramaphosa.

He said Tambo was a repository of the best values and principles upon which the democratic South Africa has been founded and sustained.

“He won the respect of his peers and the world at large through exemplary conduct,” Ramaphosa said. “He was radical, yet polite. Militant yet respectful.”

The unveiling of the long-awaited statue of the ANC leader drew an extraordinary line-up of local and national political leaders and a good turnout of former anti-apartheid activists.

The celebrity line-up included Lord Paul Boateng, a former anti-apartheid activist, Shadow Foreign Secretary Emily Thornberry, who is the MP for Islington and South Finsbury, and Catherine West, the MP for Hornsey and Wood Green. Dame Janet Suzman, the veteran South African-born actress, and Ambassador Lindiwe Mabuza, the long-serving former South African High Commissioner in the UK under whose watch the statue project was conceived, attended the two-hour ceremony. And Ann Grant, a former British High Commissioner to South Africa, was there too.

So did Sir Nick Stadlen, the retired High Court Judge and director of the acclaimed documentary, Life is Wonderful: Mandela’s Unsung Heroes which has had more than 40 screenings in the UK, South Africa and the US and is due to be shown at 6,500 state schools in South Africa over the next two years.

Tambo’s vision and values were very much in line with those of the Rivonia defendants who are highlighted in Stadlen’s outstanding film for their selflessness, commitment and unity of purpose.

Also present was Kuseni Dlamini, chair of the pharmaceutical Aspen, which sponsored the event.

Mabuza paid tribute to OR Tambo’s “honesty, compassion and iron integrity” as his strongest qualities.

She compared him to some of the iconic leaders of the 20th century and related many anecdotes of how he had mentored exiles and helped them to achieve their goals in life.

She also paid tribute to his role in changing attitudes towards women in the ANC, challenging traditional stereotypes of women as submissive and subservient.

“He liberated us,” said Mabuza. “It was not always like that in the ANC.”

He said that the vision and values of Oliver Tambo had not yet been fully achieved in South Africa and that the struggle for economic rights and justice still had a long way to go.

But he said Tambo had laid the foundation for a just society by the power of his example and the way he had lived his life of sacrifice and spiritual generosity.

Boateng recounted a meeting of church leaders in Lusaka in the dying days of the apartheid regime, where the late Beyers Naude, the Afrikaner priest who renounced his past and backed the ANC, had arrived and Tambo had reached out and embraced him as a brother.

“I will always remember that powerful moment of reconciliation… the discovery of a common spirituality which augurs well for the future,” he said.

He also recalled the moment at which the late British Prime Minister Margaret Thatcher was alone in the Commonwealth holding out against sanctions against apartheid South Africa.

Tambo had responded by declaring London an anti-apartheid zone, erecting a statue of Nelson Mandela on the South Bank and calling on people of all races to come together in opposition toapartheid. He had responded to the violence of apartheid by building bridges and building a coalition against apartheid.

Citing the paralysis in the British political system over Brexit and the ongoing inequality and racial prejudice in both countries, Boateng concluded that neither country could be satisfied with the status quo.

He said the vision and values of Oliver Tambo were sorely needed in the world today, more than ever before.

Shadow Foreign Secretary Emily Thornberry paid tribute to Tambo for providing the intellectual leadership and vision which had held the ANC together for three decades.

Noting that the ANC’s former London headquarters at 38 Penton Street had fallen in her constituency, she said she wanted to create a centre for learning in the area which would focus on the anti-racist struggle in Britain.

“We also need to use this occasion as an opportunity to think about the future of South Africa… a future with extraordinary potential,” she said. “We should maintain our close relationship with South Africa.”

Leader of the Haringey Council, Joseph Ejiofor, said OR Tambo was a hero among black people in Britain and had sustained them in their struggle against racism in their own country.

In the London version, Tambo is holding up a copy of the Freedom Charter, the 1955 treatise that proclaims that South Africa belongs to all who live in it and formed the basis of the Charter movement.

About 25 metres into the park there is a bust of Oliver Tambo by the late Ian Walters which was unveiled in 2007 to mark the place where OR Tambo – and his wife Adelaide and members of his family – often came from Muswell Hill to find peace and solitude from a constant stream of visitors and a vigorous travel schedule.

“Today we salute the rich legacy of a noble and humble man,” said Ambassador Mabuza.