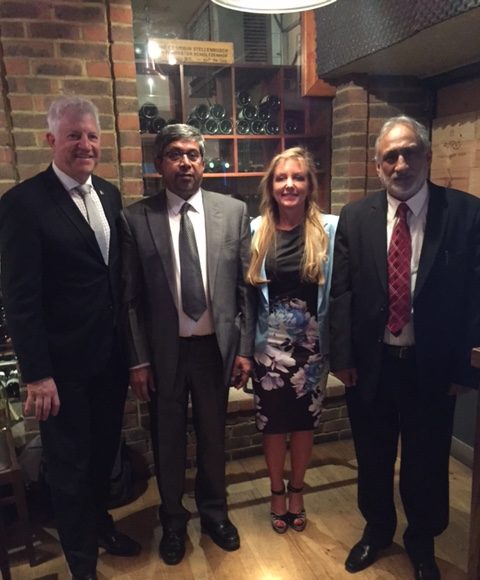 A Western Cape trade delegation made its mark in the UK this week with a diverse group of small and medium businesses which showed that the province can box above its weight in post-Brexit Britain.

“We wanted to fly the flag and show that we have every intention of growing our trade and investment despite the political challenges and South Africa’s investment downgrading to junk status,” Winde said.

The Western Cape delegation was hosted by the South African Chamber of Commerce at an all-day seminar in London and engaged with potential British investors and joint venture partners and attended briefings and a reception hosted by the British Foreign Office before moving on to Manchester and Edinburgh.

Winde said the province had shown “phenomenal growth” in the past year which was reflected in a 15% hike in property prices, a 30% increase in tourism, a proliferation of independent power producers and at least six major international hotels on the pipelone.

He said there was promising development in the oil and gas sector, the service sector, agriculture and agri-processing and renewable energy.

The 10 small and medium businesses in the delegation included several from the fruit and produce sector, beverages, transport, technology and waste processing and recycling.

“We wanted to shore up the Western Cape in its most important overseas market, ” said Wesgro’s Tim Harrison.

“Our excellent prospects for growth are largely because of the UK market, ” he said.

Harrison said that over 400 000 Britons visited the Cape annually and the UK represented the province’s most important partner in technology, the service sector and renewable energy.

“We are here to promote South Africa via the Western Cape but also to show that the province offers the best skills and institutional framework for investment and Cape Town is the city of choice for leading financial and insurance companies, retailers and food producers,” Harrison said.

He said that if the Western Cape was a country it’s economy would rank as the eighth largest in Africa and the city of Cape Town would rank 14th.

The Western Cape was part of the African market which by 2050 would represent an estimated 2 4bn people compared to 2 2-bn in India and 1.83m in China.

South African Chamber chair Sharon Constancon said the delegation had highlighted the potential for increased two-way trade based on the 200-year history between the two countries.

“The SA Chamber was honoured to be involved in the visit and to bring our members to the table,” said Constancon.

“The Minister and CEO of Wesgro shared their insights into the value the Western Cape brings to South Africa and to Africa as continental gateway,” she said.