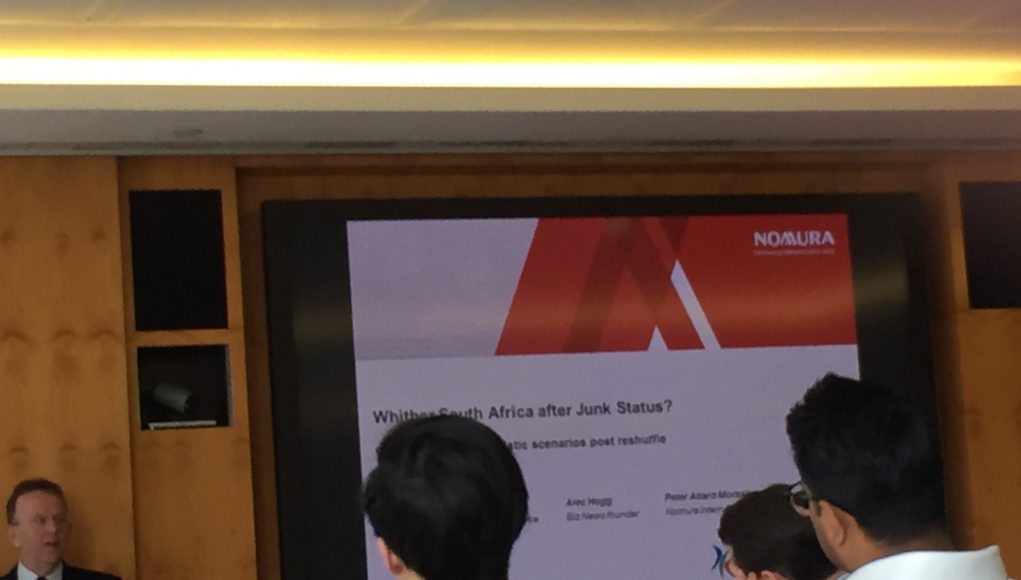 On 27th April the SA Chamber in partnership with Nomura International convened a breakfast seminar entitled: “Whither South Africa after junk status?”

The event was hosted by Peter Attard Montalto of Nomura who gave the pessimistic scenario while Alec Hogg, founder and editor of Biznews, argued the upbeat case. John Battersby of the SA Chamber chaired the discussion.

The event was well attended by an influential audience of 40 or so bankers, investment directors, analysts and consultants.

The debate on the effect of the junk status being placed on South Africa revolved around a pessimistic or bleak view of the future (argued by Peter Attard Montalto) and an optimistic and more upbeat view of the future (argued by Alec Hogg). Peter based his arguments on the numbers surrounding the economy and economic performance including unemployment and job creation and how these numbers had moved in recent months.
Alec focused on the underlying and more intangible indicators – reading the straws in the wind, as he put it. He felt that broadly the different races in SA do get on, perhaps contrary to many common assumptions; the people who are marching in protest now include (crucially) the middle classes; only 15% of the people in SA have confidence in their Government (he contrasted this with other low figures around the world – Poland 21% and Brazil 26%); high profile people from within the ANC are distancing themselves from President Zuma and his supporters (including Cyril Ramaphosa last weekend) and overall there is a momentum growing that says enough is enough and the plunderers will not be allowed to continue.

Alec also pointed to recent changes to the Board of SABC, who he described as the propaganda channel for the Government. Apparently five new Board members are openly anti-Zuma.

Peter on the other hand argued that real change depends on job creation and a consequent reduction in unemployment to drive the economy; and he simply doesn’t see where that is going to come from. He said that SA needs to create 600,000 new jobs each quarter but he reckoned the country is managing only about a third of what it needs (around 150,000-200,000 jobs).

Peter argued that Zuma’s priorities are all about retaining power, staying out of jail and “bumbling along” as he put it in order to maintain a broad status quo.

Where Peter and Alec did agree though was in the immediate future i.e. the rest of this year, leading up to the Elective Conference and then the immediate aftermath.

Both predicted turbulence and difficulties and possible further shocks to the economy. Peter reckoned that even with the right economic and fiscal policies in place it would likely take 7 years to get out of junk status – and he saw little prospect of those policies seeing the light of day any time soon.

Alec reckoned that while he wouldn’t advise international investors to go anywhere near South Africa in the immediate future, if they were prepared to look 3-5 years hence he felt there were good prospects for worthwhile returns, although he did caution he wouldn’t apply that to the bond markets.

They also agreed, not surprisingly, that whatever opposition there is building up, President Zuma and his supporters are not going to roll over and give it all up.

Interestingly, Alec felt that Cyril was unlikely to “fight dirty” and would therefore probably not be strong enough to take over. However, Alec did point out that President Zuma has backed down on issues before (student fees for example), when he sees the writing on the wall and therefore could do so again. He also made the interesting comment that he believes that the ANC will eventually self-correct from within.

Alec also cited the decision of the High Court in Cape Town ruling that the nuclear deal agreed between Zuma and Putin in 2014 was unlawful and unconstitutional and said this was further evidence of the gathering momentum of opposition in the country to stop the inappropriate use of state funds by the ruling elite.