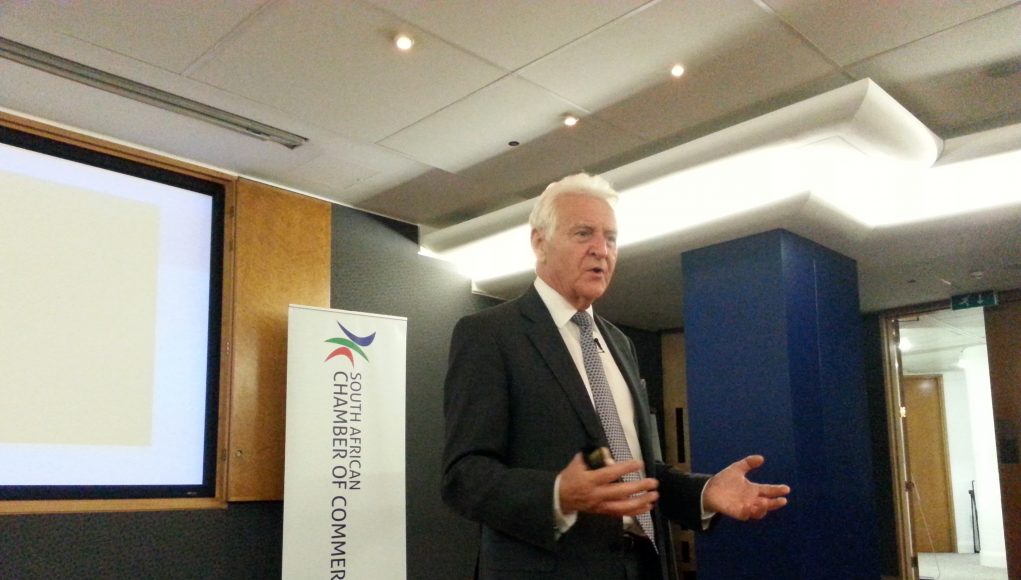 The South African Chamber of Commerce was honoured to host Frank Dick OBE at our monthly speaker event to address member on “The Winning Difference.” Frank is the current President of the European Athletics Coaches Association, Member of the IAAF Coaches Commission, as well as Chair (and architect) of the IAAF Academy. From 1979 to 1994 he was the British Athletics Federation’s Director of Coaching, where he was widely acknowledged as and remains one of the outstanding sports coaches and coach mentors in the world.  In this position Frank led the British Athletics team into its “golden era” with Olympic gold medallists such as Daley Thompson, Steve Ovett and Sebastian Coe. Frank personally trained Daley Thompson and created training programmes for individuals such as Gerhard Berger, Katarina Witt, Boris Becker and Justin Rose.

His presence and energy quickly engaged the audience, challenging them that they have a choice in life – “a choice to be ordinary or a choice to be great”. And when it comes to creating a successful team within your business, it’s imperative to align each person in your organisation with the “why” of your organisation, i.e. building a successful team requires you and your team to have a greater purpose than simply a financial motivation. He urged the audience not to prescribe a mission for their team to follow but to have their team create the mission and values as a collective. “Sustainable performance is excellence in what we do and how we do it personally and collectively”, he said.

When creating championship-level results Frank said: “You can’t control results. The only thing you can control is your performance and activity.” To produce results, he urged each person to be willing to be coached but also to serve as coaches to serve others on their team. Give your team a sense of responsibility, but in giving people ownership you as the leader must also be willing to let go and trust the process of development.

There are 3 levels of responsibility:

– the responsibility for your own performance

– the responsibility for your own development

– the responsibility to coach others

In creating a championship team you as the leader need to find out the strengths, weaknesses and opportunities within each of your team members. He said: “Learn how each person likes to receive the pass because how one player likes to receive a pass is different for another player.”