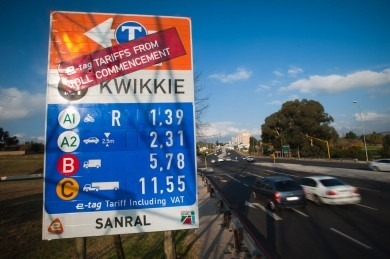 According to a report by Bloomberg, the long-running campaign against e-tolling – a cause that has united traditional rivals Cosatu and the DA, as well as mainstream opinion – has now placed the South African National Roads Agency Ltd (Sanral) in dire straits. Sanral embarked on the ambitious Gauteng Freeway Improvement Project (GFIP) before South Africa won its 2010 World Cup bid, and the project was substantially complete by late 2010.

Now, Gauteng has 34 upgraded freeway interchanges and a remarkably improved traffic situation at peak times, but bills are falling due and there is no money to pay them.

As Sanral spoksperson Vusi Mona said to Bloomberg news this Wednesday, “SANRAL has almost totally depleted its available cash. We’re not able to fund ourselves any further, due to investors not feeling comfortable with our risk profile.” What Mona refers to is the unprecedented level of public opposition to e-tolling, which for complex reasons has managed to unite a broad coalition of powerful opponents, many of which are from opposite sides of the political spectrum. Cosatu, for example, opposes e-tolling chiefly because, by the regressive nature of a flat tax, it falls hardest on working people. The DA oppose e-tolling as an inefficient platform for funding road improvements – for which they propose fuel taxes instead – and a likely source of future patronage for the state and ruling party.

This opposition, which has rapidly gained legal force as OUTA (Opposition to Urban Tolling Alliance), has waged a number of legal challenges against e-tolling. While courts deliberate, all of South Africa’s roads edge closer to precarity as Sanral’s financial position worsens by the week.

According to Bloomberg’s figues, Sanral borrowed R20 billion (£1.3 billion) to fund the project. Its debt now approaches R65 billion, R1,5 billion of which is in bonds that mature at the end of October, a mere 13 weeks away. Sanral cannot find investors willing to lend to it, or to take over its debt, since it is far from clear that its chief proposed source of income – e-tolling – will ever succeed in becoming law.

Mona said, “We’ve requested further assistance. The government is not in a position to provide any further assistance, other than the guarantee…Treasury said it hasn’t been approached for further financial assistance for SANRAL. Such assistance would be hard, if not impossible, given the difficult economic environment we’re in.”

Given the results of the CSIR’s 2011 “7th State of Logistics™ Survey”, which showed that South Africa’s logistics sector was a chronic underperformer in terms of costs and efficiency, and the glacial pace of the comeback in rail freight , Sanral’s financial woes are immediately concerning to anyone interested in Gauteng’s future as South and Southern Africa’s preeminent economic hub.

As Hans Ittman of the CSIR report team says, “Supply chain performance will be mediocre unless the organisation, people, skills sets, and culture are world-class. If we settle for such mediocrity, South African business will be sluggish, generating sub-standard economic growth…Our logistics sector needs to outperform its historic highs.”

While 89% of the country’s freight continues to move by road, the fully-finished e-tolling gates over Gauteng highways remain shuttered and drivers wonder who will blink first.